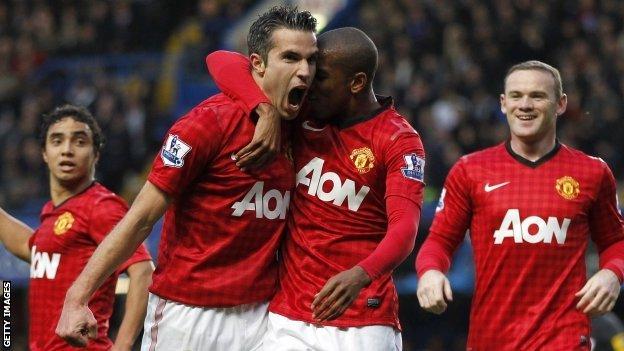 Manchester United closed the gap at the top of the Premier League to one point after Javier Hernandez's late winner gave them a hotly contested win over nine-man Chelsea at Stamford Bridge.

David Luiz's own goal and Robin van Persie's clinical finish gave Manchester United a two-goal lead early on, but leaders Chelsea fought back superbly to level with goals from Juan Mata and Ramires either side of the interval.

A pulsating game then turned on two red cards awarded against Chelsea in the space of five minutes that set the scene for substitute Hernandez to secure the three points for Sir Alex Ferguson's side.

Chelsea had few complaints about Branislav Ivanovic's red card for fouling Ashley Young as he raced through, but the dismissal of Fernando Torres for diving was bitterly disputed by the home side - and they looked to have a case.

The Spaniard appeared to be caught by Reds defender Jonny Evans but referee Mark Clattenburg ruled he had dived and produced a second yellow card, to the obvious astonishment of Torres and the undisguised fury of Chelsea.

Substitute Hernandez then smuggled in a winner from close range but it was converted from an offside position to leave Chelsea manager Roberto Di Matteo nursing a burning sense of injustice.

Objects were thrown and a steward injured as United's players celebrated - a sad conclusion to a thrilling game that ended in Chelsea's first Premier League defeat of the season.

Van Persie scored a hat-trick in Arsenal's 5-3 win on his last visit to Stamford Bridge, and he was the central figure as United stunned Chelsea with a devastating opening burst.

Ferguson ditched the diamond formation he has used recently and gave United natural width in the shape of the returning Antonio Valencia and Ashley Young. It yielded spectacular results early on.

Young's pace allowed him to play in Wayne Rooney and when the England forward pulled the ball back Van Persie's shot ended up in the back of the net via the upright and Luiz.

And before Chelsea could recover United doubled their lead as Valencia once again demonstrated his value with a fine run and cross for Van Persie to sweep a finish past Petr Cech.

It was to Chelsea's credit that they managed to clear their heads and find a route back into the game. United goalkeeper David de Gea resorted to the unorthodox to kick away Luiz's free kick and Evans deflected Jon Obi Mikel's cross on to a post with De Gea wrong-footed.

Chelsea deserved some reward and it came on the stroke of half-time. Rooney was booked for hauling down Eden Hazard and Mata curled home a superb free-kick.

Mata was then denied once more by the excellent De Gea but Chelsea had all the momentum and they were back on level terms after 53 minutes when Ramires rose above Tom Cleverley to equalise.

The game was balanced perfectly but it shifted decisively towards United when Chelsea lost two players to red cards just after the hour. Ivanovic was sent off for tripping Young as he raced on to Van Persie's pass then, far more contentiously, Torres was also dismissed for picking up a second yellow card for diving.

Torres was arguably fortunate to escape a red card when he was booked for a high challenge on Cleverley but felt he had been hard done by after falling following Evans's challenge.

It was a huge call by Clattenburg because it looked like Torres had been caught by Evans, but the referee was convinced the striker had dived. Chelsea's backroom staff were furious and angry words were exchanged between Ferguson and his opposite numbers as the heated debate continued.

Chelsea's depleted numbers were always going to be in danger. And so it proved as United went ahead with 15 minutes remaining. Van Persie's shot was blocked by the feet of Cech but when Rafael returned the ball into the six-yard area Hernandez turned in from an offside position.

United's players celebrated in a corner of Stamford Bridge but they were met by furious scenes, with objects appearing to be thrown and a steward requiring lengthy treatment.

Ferguson's side closed out the win to move within striking range of Chelsea at the Premier League summit but the jeers directed at Clattenburg as he left the pitch at the final whistle demonstrated the strength of feeling inside Stamford Bridge.