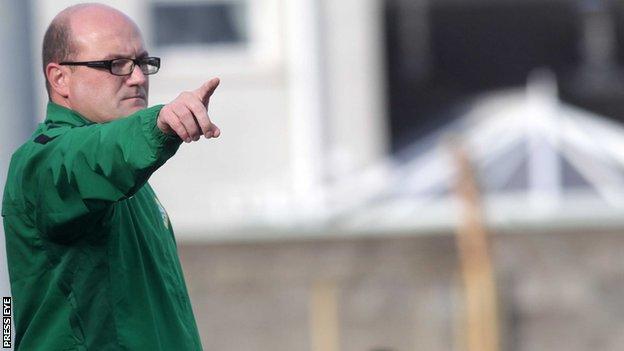 Declan McGreevy has been forced to stand down as manager of Donegal Celtic after it emerged he was not qualified to be a Premiership boss.

He is to be replaced by Pat McAllister who will take charge of the west Belfast club for a second time.

Former Ards player and manager McGreevy had pipped McAllister to the job after Stephen Small's resignation.

McGreevy's reign lasted less than two weeks when it was discovered he did not have the required coaching badges.

His last match in the DC dug-out was Saturday's 1-0 defeat by Portadown at Shamrock Park.

"I met with committee members after the game as they were coming under pressure from the Irish FA about the need for the club's named manager to have an 'A' licence," said McGreevy.

"To take that pressure off the club, I decided to walk away. It is not my style to get involved in politics or internal wranglings.

"Rules are rules and managers must have licences these days.

"I wish Packie McAllister all the best and hope he does well with the team. The players certainly put in a great performance against Portadown."

McGreevy revealed he had applied for the 'A' licence and hopes to obtain it soon.

McAllister succeeded Paddy Kelly as DC manager in 2009 and immediately guided them to the Premiership, beating Institute in the play-off.

However, he quit before the start of the 2010/11 campaign, citing personal reasons.

Donegal Celtic are bottom of the Premiership with no wins and just four points from 12 matches.

Their next match is at home to Glentoran on Saturday, 27 October.