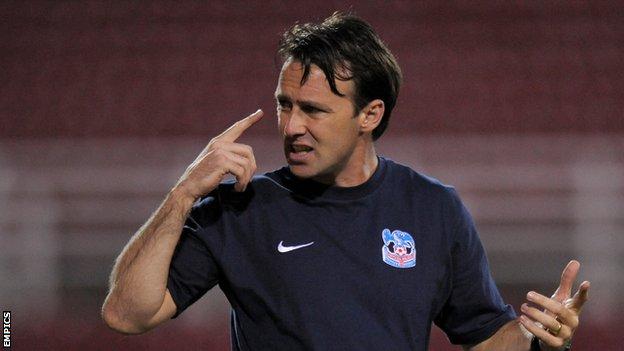 Dougie Freedman is expected to be installed as manager of Bolton Wanderers by the end of the week, reports BBC Radio Manchester.

Crystal Palace granted Bolton permission to speak to the 38-year-old about their managerial vacancy, having turned down their initial approach.

Lennie Lawrence and Curtis Fleming will be in charge for the Eagles' game against Barnsley on Tuesday.

Bolton have been without a boss since

Academy chief Jimmy Phillips took charge for Saturday's win over Bristol City and is set to pick the team for Tuesday's Championship fixture at Wolves.

But it is understood that Freedman could be at the helm by the time Wanderers visit Middlesbrough on Saturday.

The former Scotland international, who is in his first managerial role, led Palace to the League Cup semi-finals last season and has steered them to fourth in the Championship this term - 12 places above Bolton.

Having been on QPR's books as a youngster, he later joined Palace where he had two spells as a player.

Freedman also played for Wolves, Nottingham Forest, Leeds United on loan and Southend, where his career ended in March 2010, allowing him to return to Selhurst Park once more to join the coaching staff.

Bolton caretaker Phillips said he was made aware of the club's desire to appoint Freedman by chairman Phil Gartside on Sunday.

"Phil said from the outset he'd be open and honest with us," said Phillips.

"He came to the training ground on Sunday and said he had made contact with Crystal Palace to speak to Dougie Freedman.

"We've said all along that Phil and Eddie [Davies, Bolton's owner] will be the people who pick the next manager of Bolton Wanderers.

"It won't be for anybody to put their names in the ring and suggest they want to be manager. In the meantime we said we would work our hardest to get the best out of the players."

Speaking to BBC Radio Manchester before Saturday's game, which Gartside said: "Everybody has recognised that it is a very important appointment, this one.

"We believe we've got a good squad and it's important that we get the wheels back on and get promoted this season. It's vital to us so we're going to give it due process.