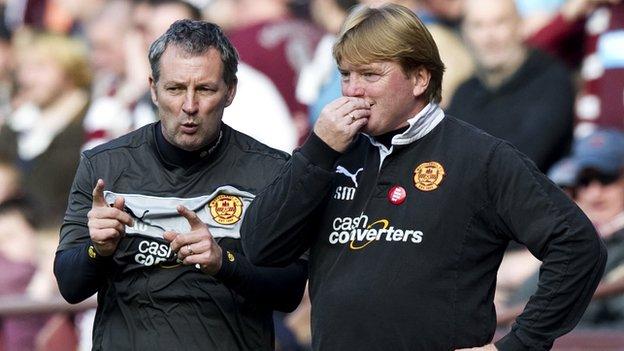 Motherwell manager Stuart McCall felt his side deserved a point from their match against Hearts at Tynecastle.

A 30-yard Danny Grainger strike condemned them to a 1-0 defeat, but their manager felt his side's performance was worthy of better.

"I think, if we'd come away with a point, we'd have deserved it, I have to say that," he told BBC Scotland.

We're disappointed to lose the game, in a game I thought was well competed

Former Rangers midfielder McCall felt his team could have done more to prevent the Hearts goal.

"We were punished for not closing the ball, it's a great strike by Grainger, but we could have defended better there," he said.

"Thereafter, for a 10-15 minute spell, they got a grip of it, but I thought we started well.

"Twenty minutes before half-time, we were in control and, second half, we had a right good go."

McCall pointed out that Michael Higdon and Nicky Law both went close to scoring an equaliser.

"We got plenty of corners, we got to the dead-ball line plenty, got balls back, Higgy has had a couple of chances, Lawsy has had a header, but I said before the game that they are strong defensively," he said of Hearts.

The 48-year-old former Scotland midfielder was happy with his team's display.

"I felt the way we were pressing we would get a goal, but it wasn't to be our day, but they are two very tight teams and two good teams," said the former Bradford City manager.

"We're disappointed to lose the game, in a game I thought was well competed.

"Today, I thought we were as good them, we matched them - a good Hearts side - we will take a lot of positives from it."

The Steelmen suffered a blow when defender Shaun Hutchison was forced off with an injured hamstring just before half-time, but McCall does not think he will be missing for too long.

"We're hopeful he's not going to be out too long, maybe a couple of weeks," added the manager.

"It's a big blow to us, because Hutchy's a key player."