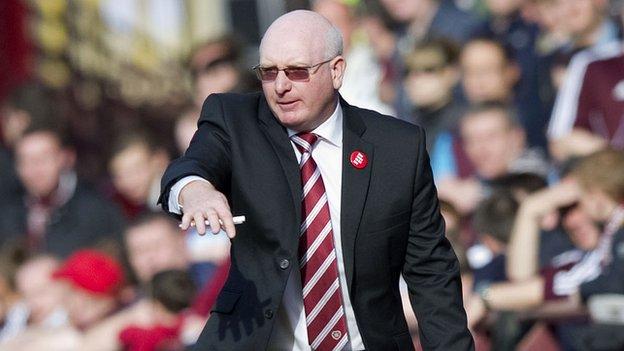 Hearts manager John McGlynn refused to comment on rumours linking Rudy Skacel with a return to the club.

Skacel, 33, has been training with the capital club but claims that is the extent of the relationship.

The Czech international said: "I am a professional tourist and I'm having a great time in Edinburgh."

Any deal would be dependent on the outcome of Monday's Scottish Premier League board meeting, which will discuss Hearts' transfer embargo.

Everything will be sorted out tomorrow

McGlynn was speaking after Hearts' first home league victory since the opening day of the season, Danny Grainger's strike being enough to defeat Motherwell.

The former Raith Rovers boss singled out the wingers currently at Tynecastle, Arvdyus Novikovas and Andy Driver, for praise after his performance against Motherwell.

"He's been doing well actually, Arvdyus," said McGlynn. "It's great for the fans when you've got guys who are going to take defenders on.

"Driver had excellent opportunities in the first half, so did Arvdyus, and that's where we thought we could get in.

"Although we didn't score from it, we did get enough balls in the box and could have done."

McGlynn disagreed with counterpart Stuart McCall's assessment that Motherwell deserved a point from the game.

"It is thin margins, like many games in the SPL," he said. "It was a gritty performance and, because of that, I thought we just shaded it.

"The three points were so vital for us. If we can get three points against Ross County, which will not be easy, we will be not too far for the target we set for the first quarter."

Six of Hearts' players and the manager himself are still awaiting their salaries for October, which were due on 16 October.

"Everything will be sorted out tomorrow," added McGlynn.