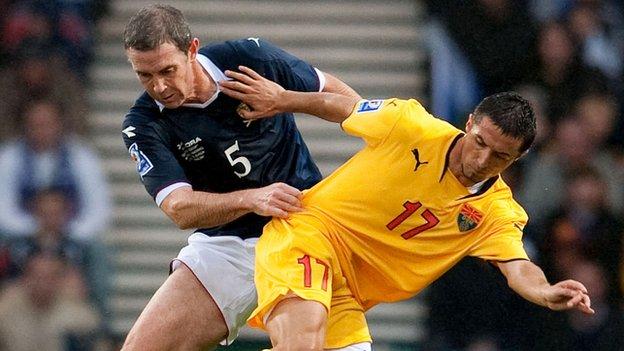 Scotland are bottom of their World Cup qualifying group with only two points from four matches.

Coach Levein has come under pressure due to the poor start, but the former Dundee United boss has Weir's backing.

"I don't think removing Craig from his position is going to solve the problem," Weir told BBC Scotland.

Levein has come under-fire after his side lost to Wales and Belgium earlier this month.

It leaves them with virtually no hope of reaching the World Cup in Brazil in two years time, but former Rangers captain Weir does not believe it is solely the boss's fault.

"I don't think changing the manager is going to solve the problem."

The former Everton defender, back at Goodison Park as a coach, doesn't feel the national team lacks the players to be able to compete.

"You look at our teamsheet and the players involved, the level they are playing at, I think it's very good," he said.

"It's such a fine line. For the game in Wales, if the second goal is rightly given, I think the game is won.

"I'm sure Craig would be the first to agree that results haven't been good enough, albeit bad luck playing a big part in that."

The 42-year-old, who won 69 caps for Scotland, believes there are reasons for optimism, especially with the European Championships expanding to 24 teams from 2016.

"The way our start has been, we have to look towards 2016 and the European Championships," he added.

"I know it will be slightly easier to qualify for that in respect of the number of teams."