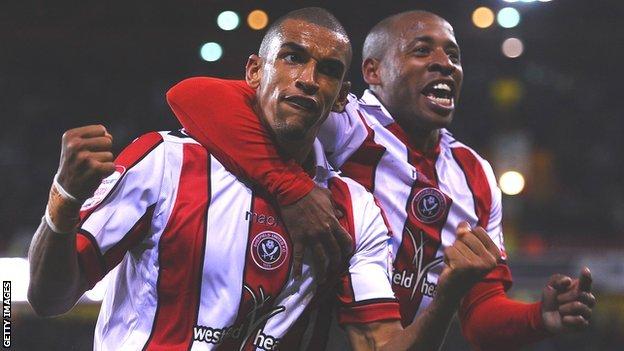 Sheffield United moved up to second in League One as they extended their unbeaten start to the league season with victory over Portsmouth.

Nick Blackman's second-half penalty, awarded after Chris Porter was fouled in the box by Lubomir Michalik, was enough to give the Blades the win.

They were made to work hard by a Portsmouth side who hit the bar through Akos Buzsaky's first-half drive.

Danny Wilson's side, who missed out on promotion to the Championship last season courtesy of a penalty shoot-out loss to Huddersfield in the play-off final, have now gone 15 matches without defeat in League One this season.

They began confidently, with Blackman firing in an early shot which was saved by Pompey keeper Mikkel Andersen.

Portsmouth, who have had an inconsistent start to their campaign which has left them mid-table, responded and came within a few inches of taking the lead when Buzsaky's superb long-range effort struck the woodwork.

United's Neill Collins headed over and Chris Porter put a header wide but it was the visitors who looked the more likely scorers in the first half with Scott Allan shooting wide after a strong run into the area and Buzsaky's drive going just over.

The game was settled in the 66th minute when Michalik slid in recklessly on Porter on the right side of the box giving Blackman the opportunity to calmly stroke home his eighth goal of the season.