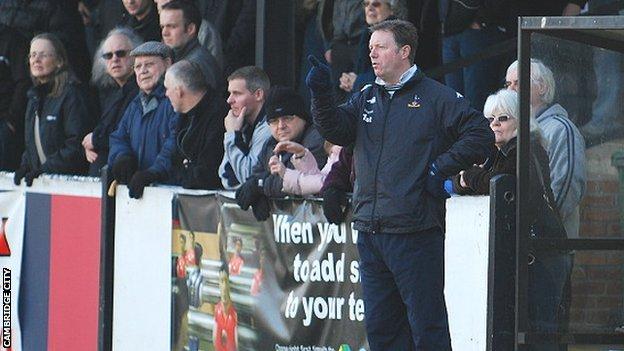 Cambridge City boss Gary Roberts believes being handed a home FA Cup tie is the only way his side could consider overcoming MK Dons.

The Southern Premier Division side will host the League One Dons in the first round on the weekend of 4 November.

"If you're going to get a big team then you need to be at home," Roberts told BBC Radio Cambridgeshire.

"We'd be cannon fodder going to one of their grounds. To give us a chance we need to be at home."

City's most recent encounter against a Football League side was also against the Dons - an FA Cup second-round 1-0 home defeat in 2004, which was also at Milton Road.

"It doesn't give us an edge but it gives us some semblance of winning the game," he added.

"It's not about making them uncomfortable before the game - it's about during the game. That's got to be the aim for the players."

The Lilywhites hope to get confirmation from the local authorities that the game can be safely played at their 2,722-capacity ground.

And Roberts is adamant the game should be selected for television.

"I think we deserve a TV tie. When we drew MK Dons last time in the second round I would have thought that would have been a nailed on tie but we got overlooked," he said.

"I think fate, God and the FA (Football Association) owe us a TV tie.

"The finances you might get from a TV tie make up a little bit for any problems you get for going out of the competition. It would show us to a much bigger audience. It would be a tremendous thing for the whole city."