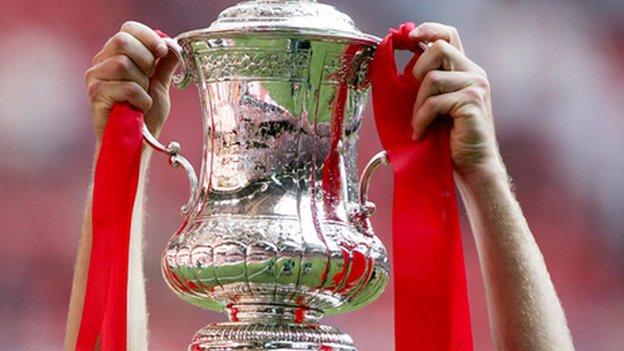 The Southern League outfit were 3-1 up with two minutes of normal time remaining against their Blue Square Bet Premier opposition.

But late goals from Aaron O'Connor and Tony James earned County a replay at Rodney Parade on Tuesday.

"It's bittersweet at the moment," Cousins told BBC Radio Bristol.

"If you had said we would get a draw against Newport we'd have taken that before the game.

"But to be so close with so little time left on the clock is very disappointing.

"There were a few getting carried away in the dugout. I've seen it happen so many times before when people just switch off and think it's over.

"I was begging for the the final whistle to be blown but I can see where the extra six minutes of stoppage time came from.

Newport currently sit 88 places above Yate in the non-league pyramid.

Yate are bottom of Southern League Division One South and West, while Newport are top of the Blue Square Bet Premier standings.

"You've got to see these games out and unfortunately we didn't."

Yate are currently bottom of the Southern League Division One South and West table, with just three points from six games, while Newport are three leagues above and sit top of the Blue Square Bet Premier.

The winners of Tuesday's replay will face Cheltenham Town in the first round proper at Whaddon Road.

"We've got a massive task ahead of us but we've been written off before and we've proved, on the day, we can match anybody," added Cousins.

"The players were really dejected after the game but they've got to dust themselves down."