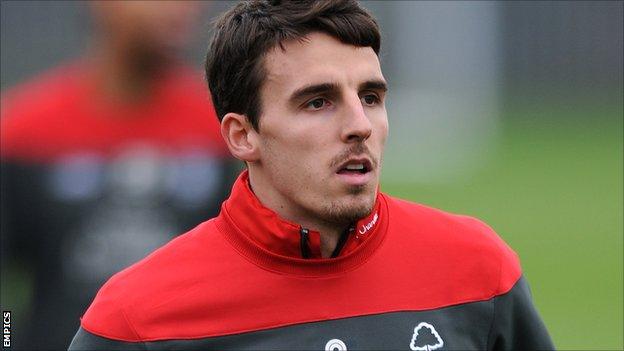 Both players scored in Saturday's 2-0 home win against Leyton Orient.

runs until January, while Derbyshire has a week remaining on his loan deal from Nottingham Forest.

"Without getting too confident, we're more than hopeful that it [Derbyshire's loan] will get extended," Dickov told BBC Radio Manchester.

"He's here until next week so we can't do anything until after the Crawley game anyway. Matt's loving it here and he was top class on Saturday.

"We think Jose can play at the top but I hope that's not for a long time, because that means he'll be with us for a little bit longer.

"We're speaking to him [about extending his contract] but the biggest thing for us is that Jose's loving it here.

"He loves being in and around the boys here and he's really enjoying his football so we'll do everything we can to keep him."

After winning only one of their first eight league matches, Oldham have now been victorious in three of their last four, helped by the form of Baxter and Derbyshire.

Dickov added: "A lot of the boys in there - and this is no disrespect to them at all - They're good footballers with great attitudes.

"What we need to do is get these players in that possibly other clubs don't want, make them believe how good they are and get them enjoying their football again."