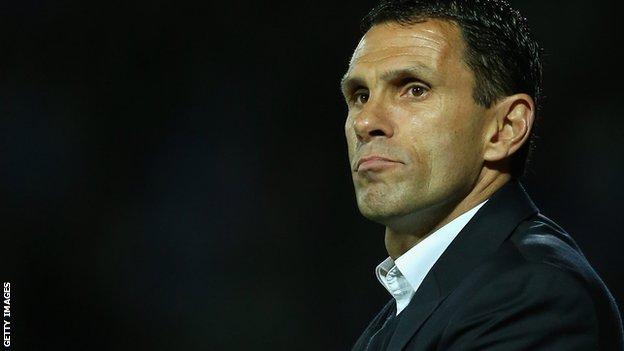 Brighton boss Gus Poyet has insisted he is happy with his side's form despite managing just one point from their last three home games.

The Seagulls lost 1-0 against Middlesbrough on Saturday following a home defeat by Birmingham and a draw with Ipswich, and have not won at the Amex since mid-September.

But Poyet told BBC Sussex: "I'm not concerned with the home form.

"The three teams that came here did nothing to win the game."

He continued: "With my team going away from home and doing what the three teams did here, I would be quite disappointed.

"I'd be happy with the result but in the long term it's not good for anyone.

"We need to get used to it, 11 players behind the half-way line, not having a shot until the 90th minute. It's a plan and it works, but it's up to us to change it."

Brighton welcomed back striker Craig Mackail-Smith in to the starting line-up after a spell out with a hamstring injury, but despite the side's 16 shots at the Boro goal, Brighton still failed to convert.

"We had the ball the most time, we had the most chances, more shots, more corners, and more crosses but we didn't score," continued Poyet.

"I'm not bothered by it. As soon as one goes in, one team is going to take seven or eight in.

"We cannot blame anyone, the good thing is we're creating chances and we're going forward with options."