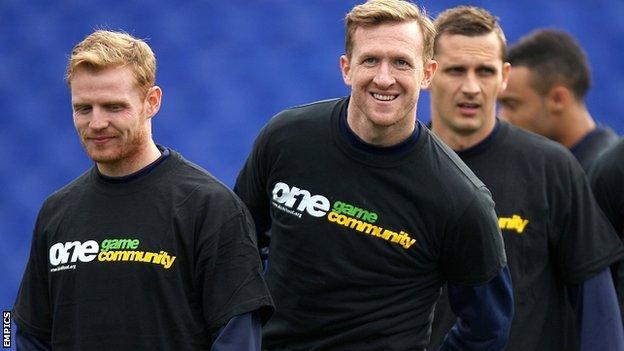 The Football League says it has no immediate plans to offer funding to Kick It Out.

The anti-discrimination body receives £110,000 each from the Premier League, the Football Association and the Professional Footballers' Association (PFA) every year.

But the Football League says it cannot afford to help fund the organisation, whose annual budget is about £450,000.

"Clubs give considerable 'in kind' support," a spokesman said.

"They have a strong track record of tackling racism."

The Football League's 72 clubs have suffered a shortfall in funding in recent years after a reduction in TV money. The current three-year deal is worth £195m over three years.

That is dwarfed by the Premier League, whose TV domestic and overseas deals have yielded £3.18bn over the last three years, with the domestic package jumping from £1.78bn to £3bn next season.

The Premier League's donation to Kick It Out is equivalent to 0.01% of its annual TV earnings but it points out it has always met the body's needs and will be offering it long-term funding.

If the Football League was to contribute a similar percentage based on its TV deal, it would amount to about £6,500 each year. The PFA's annual turnover is £24m while the FA invests £60m back into football each year.

Kick it Out told BBC Sport it would welcome further support from contributing bodies after a year in which racism in football has been in the spotlight on a regular basis.

But the Football League is unlikely to discuss the issue with its clubs until its next annual general meeting in June 2013.

A Football League spokesman added: "All 72 Football League clubs participate in the One Game, One Community weeks of action and clubs are encouraged by the League to appoint a Kick It Out ambassador.

"Through our educational partner, League Football Education, the Football League also seeks to educate young players involved in youth development programmes at clubs by delivering equality training to apprentices in conjunction with Kick it Out."

Spokesmen for both the Premier League and Football Association told BBC Sport that their donations to the body were under review and underlined that they contributed to other anti-racism bodies such as Show Racism the Red Card and Football Unites, Racism Divides.

The Premier League also stated that it had funded the Tackling Discrimination survey launched last week, as part of Kick It Out's One Game, One Community week of action.

The PFA's deputy chief executive Bobby Barnes said: "Kick It Out does a tremendous job based on the level of funding it receives."