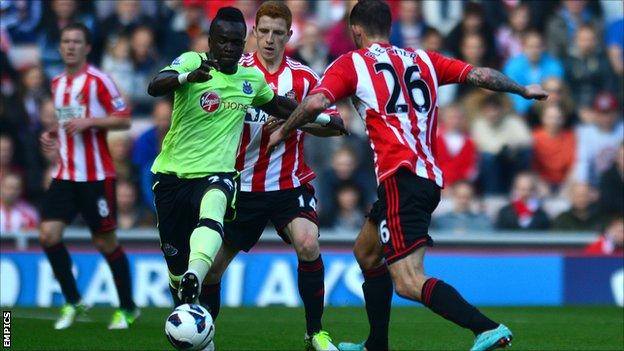 Tiote's tackle on Steven Fletcher on 24 minutes earned him a red card, leaving the Magpies to battle on with 10 men.

"For Fabricio Coloccini to come back after so many weeks out and just slot in shows the character of the man and what a great player he is.

"He's got that international quality - world class quality - and just watching him I try to learn from him."

"Everyone knows what Mike Williamson can do, he gives 100% every game, puts his head where it hurts and Steve Fletcher's probably had the hardest game he's had since he joined Sunderland."

"You take that side of the game out of Cheick and you don't get the same player," Perch told BBC Newcastle.

However defender Perch agreed with the decision of referee Martin Atkinson, who produced a fourth red card in the last three meetings between the two clubs.

"I saw it live obviously, and if I'm right you can't go round doing that," Perch added.

"It was a red card I think, from my first view, I'd have to look at it again but it was just a bad tackle."

The overriding emotion in the dressing room was one of disappointment despite an impressive display that brought Newcastle within five minutes of all three points.

"It's hard enough coming here with 11 men, but when you go down to 10 and keep the lead like we did, look secure, the feeling was more that we should have won," Perch added.

"When the goals come like that it's so hard to take, and we played so well for 66 minutes.

"For it to happen in the last four or five minutes it's a blur, but when we do look back on it, we'll think that was a good point."