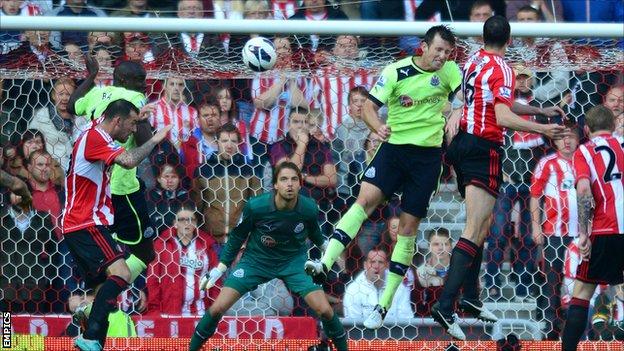 The Wearsiders were behind for 83 minutes, despite Newcastle playing for over an hour with just 10 men, before Demba Ba's own goal levelled the score.

"When a team goes down to 10 men, it galvanises them like with us last year," O'Shea told BBC Newcastle.

"Everyone's so focused on keeping your shape and it's hard to break down."

O'Shea, playing in a second derby following his move from Manchester United, faced a similar experience in his Tyne-Wear debut last season.

We have to move the ball quicker and better than we did, it was all a bit too pedestrian

Stephane Sessegnon was dismissed in March's game at St James' Park with Sunderland a goal up, but a resilient Black Cats side was eventually breached by Shola Ameobi's last-minute equaliser.

Newcastle were impressive in shutting down the hosts, although O'Shea believes Sunderland contributed to their own lack of attacking intent.

"We were just wanting to get that equaliser as quickly as we can, because then we know the crowd will practically lift us onto get another goal," O'Shea added.

"Unfortunately we left it a bit too late for that but thankfully we got it and that was the important thing.

"We have to move the ball quicker and better than we did, some stages in the second half we did that but not enough to break Newcastle down enough times.

"It was all a bit too pedestrian and we need to improve on that."

Two of the players expected to set the derby alight were Sessegnon and England winger Adam Johnson - both of whom were eventually substituted by manager Martin O'Neill.

However neither player had a lengthy pre-season, and a trio of international breaks have disrupted the folow of club games.

"If you've signed new players you want them to get a run of games to really show what they're capable of," O'Shea continued.

"Over the next few weeks, with a few bodies coming back, we'll go on a stronger run.

"We've not been losing games, although we lost to Manchester City, but we should have more wins on the board."