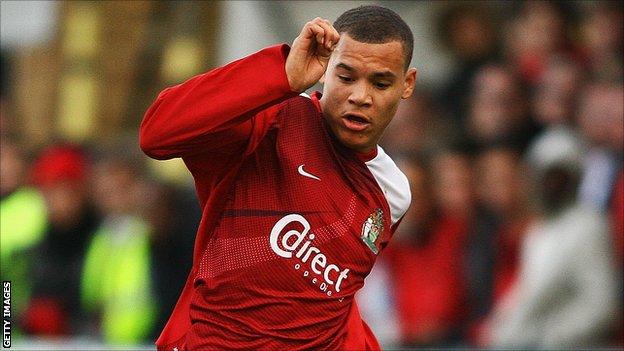 The 22-year-old has played just 17 minutes of first-team football since joining Rangers from non-league Harrow Borough in February 2011.

Hewitt has been on trial with the Shakers for the past fortnight, scoring in a Manchester Senior Cup tie against Stockport on Thursday.

He goes into Kevin Blackwell's squad to face Hartlepool on Tuesday.

Bury are still without a win this season and lie bottom of League One after losing 2-1 at Yeovil on Saturday.

They were not helped by a red card shown to another loanee, Leeds midfielder Zac Thompson, in the first half.

"The kid is learning and these mistakes are not only costly for us, but they're costly for him," Blackwell told BBC Radio Manchester.

"He won't be playing for a while now and he'll be a big loss to us. We're at a club where we're short on numbers and I can't afford to be without anybody."