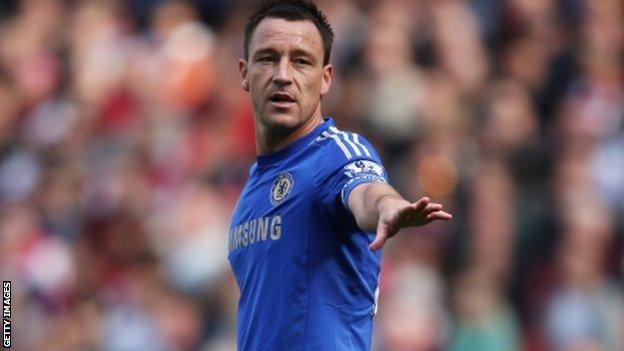 John Terry will be asked to wear an anti-racism armband if he captains Chelsea in their Champions League tie against Shakhtar Donetsk on Tuesday.

Governing body Uefa said: "The captains will be asked to wear a 'Unite Against Racism' branded armband."

The move is part of a week of action by European anti-racism body Football Against Racism in Europe (Fare).

The 31-year-old former England captain is still eligible to play for the club in Europe, however.

Anti-racism campaigners Kick It Out have been criticised with high-profile players such as Rio Ferdinand and Jason Roberts, and more than 30 other players from more than eight clubs, refusing to wear the organisation's T-shirts at the weekend in protest at a perceived lack of progress.

The Kick It Out period of anti-racism action ends on 29 October.

An independent FA panel found Terry guilty of racially abusing the Rangers defender during a game at Loftus Road. Terry received a £220,000 fine as well as the four-match ban.

The Fare campaign will be promoted at 40 matches across the Champions League and Europa League from 16-31 October.