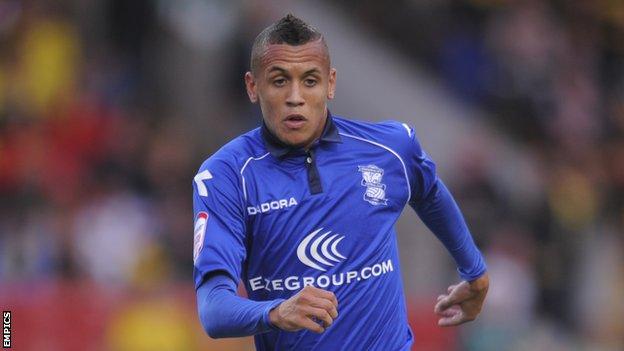 Following talks with the 19-year-old, on-loan from West Ham, Clark gave him his first start since August in Saturday's draw against Leicester.

"The conversation we had a couple of weeks ago seems to have done the trick," Clark told BBC WM.

No-one is doubting [Morrison's] ability. That's why everyone that's worked with him gets frustrated as they see a very very talent young man.

"Since then he's been nothing short of brilliant in terms of his application and his attitute."

He continued: "No-one is doubting his ability. That's why everyone that's worked with him gets frustrated as they see a very, very talented young man.

"So now we are trying to educate him on what it's going to take to get consistant and stay in the team."

Last week, Blues completed the signing of Senegal midfielder Papa Bouba Diop after being granted clearance from the Football League and Football Association.

And despite his lack of match practice, injuries may force Clark into playing the 34-year-old against Millwall on Tuesday.

"Obviously I'm running short of players in that area. I've got to calculate the whole process and whether I take that gamble to start him or not," Clark said.

"He will certainly be in the 18, but it's whether I take that risk."

Meanwhile, Clark has also revealed that he would like former West Brom defender Paul Robinson to extend his initial one-month contract at St Andrew's, after impressing the former Huddersfield boss.

"I would like Paul to be around for the long term. Not only in his performances but the way he has been around the place," Clark said.

"He's a terrific character and a winner. He's shown in his performances he's still got the quality that made him a regular Premier League performer."