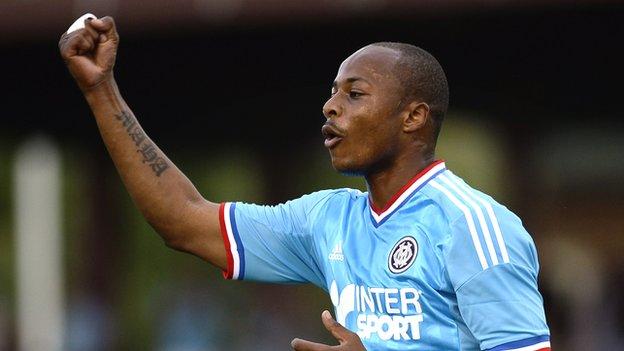 Ghana coach Kwesi Appiah has accepted an apology from Andre Ayew, despite the midfielder saying he is unhappy with the Football Association's handling of the episode.

Ayew was warned by the Ghana FA that he would face punishment if he did not say sorry for his reaction to being substituted in the Nations Cup qualifier against Malawi on 13 October.

The 22-year-old apologised but has also submitted a four-page document questioning the GFA's approach to the case.

In a short statement Appiah said: "I have accepted Andre Ayew's apology in good faith.

"We tried to resolve the matter internally after the game at a meeting but it yielded no results which resulted in my ultimatum.

"I wish to remind all players of the Black Stars that any act of indiscipline will not be tolerated as we focus on preparing for the 2013 Africa Cup of Nations."

Ayew's major gripe appears to be that the Ghana FA made public their ultimatum rather than keep the matter private.

He said he was shocked to have received a letter from the Ghana FA two days after the matter had become a subject for public discussion and media reviews.

"I believed that a few days having passed, my alleged conduct would have been pardoned or overlooked as one of those emotional moments which occur during the beautiful game of soccer, wrote Ayew.

"This would have spared me the exposure to public discussion over my conduct, the details and circumstances of which the public do not have the benefit of."

He was threatened with a misconduct charge for his reaction to being replaced in the match in Lilongwe. He angrily shook his head when leaving the pitch and it is alleged he demanded to know from the technical team why he was being taken off when he was not tired.

It was reported that he offered only a half-hearted apology to the team's management in a meeting that evening, which led to the Ghana FA's response.

In his written statement, Ayew said of the incident: "I apologise to the technical team and playing body who I am alleged to have been 'disrespectful' of as well as the Black Stars management team who 'were gravely unhappy' over 'utterances and gestures' I allegedly made when I was substituted."

Ayew also offered a "sincere and unqualified apology" to all Ghanaians and his fans.

However, the Olympique Marseille player is adamant that his disciplinary record with the Black Stars, since his debut in 2007, should have shaped the GFA's handling of the situation.

"I have had no disciplinary record with any of the national teams which I have served with all my heart and unquestionable devotion," he added.

"If my alleged conduct were judged taking into account the points I have outlined, it may - and desirably - would have taken away the public involvement by way of media discussion in this matter."

The current BBC African Footballer of the Year has represented Ghana at three Africa Cup of Nations tournaments. He also captained Ghana to the 2009 World Youth Championships.

But he has been dogged by controversy since the 2012 Nations Cup over allegations of disrespect to senior players, although he insist he would do nothing to hamper the team spirit.

"Over the years I have demonstrated total commitment to my country as a footballer and have devoted my efforts to the national team to the detriment of my club career", said Ayew.

"I would therefore do nothing to hamper the progress of the team I have so faithfully served and still serving."