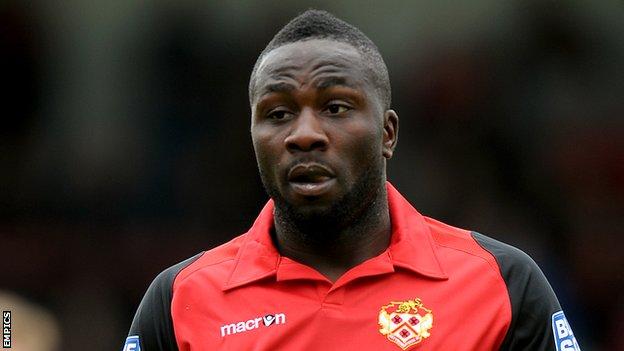 Jet-lagged Moses Ashikodi says he was "buzzing" after scoring Ebbsfleet's winner in the FA Cup tie against Woking and believes the victory will help the side improve their league position.

The 25-year-old only arrived back in the country on Thursday after playing for Antigua & Barbuda in mid-week.

And his 87th-minute strike ensured his side's first win in eight games.

"It's massive. The losses will turn to wins and I'm glad it started today," he told BBC Radio Kent.

"I was a bit tired, I'd been out on international duty and only came back late Thursday but I was glad to get on and itching to score a goal."

Ebbsfleet have had a poor start to the season, and lie five points adrift of safety in the Blue Square Bet Premier, but Ashikodi said he had no doubts that the side's form would improve.

"The fans shouldn't panic at this stage.

"I'll tell you now, I'm playing with a good group of players and there's no way we'll finish in the bottom four."