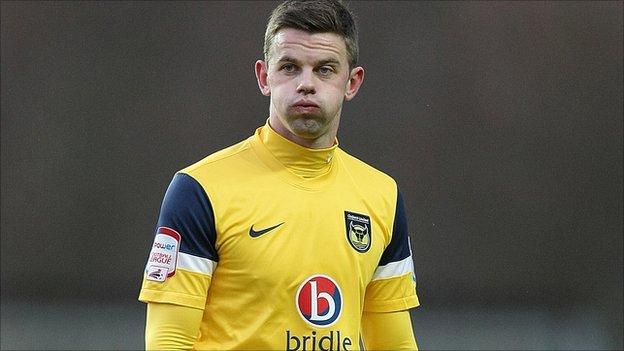 Oxford United striker Tom Craddock insists he will not get carried away with his four-goal haul against Accrington and wants their 5-0 victory to be the beginning of a winning run.

Craddock took his own personal tally to seven with the biggest goalscoring return for a U's player in 20 years.

"Really pleased with the result and to get myself on the scoresheet, so a good day's work," Craddock told BBC Oxford.

"Hopefully this can be a bit of a springboard and we can kick it on."

Craddock added: "I've scored four before in my academy days but not as a professional so I'm really pleased."

The 26-year-old was helped by two assists from James Constable and he paid tribute to his fellow forward.

"I felt the partnership coming along against Cheltenham where we got an assist for each other and even though we got beaten quite comprehensively against Port Vale their keeper made some unbelievable saves," he added.

"We work well together and I'm sure I can help him get on the scoresheet in the future and hopefully I can play a part in that."

Oxford's next game is away at Rochdale on Tuesday.

Meanwhile, it has been confirmed that defeder Damian Batt is out for six weeks because of a hamstring injury.