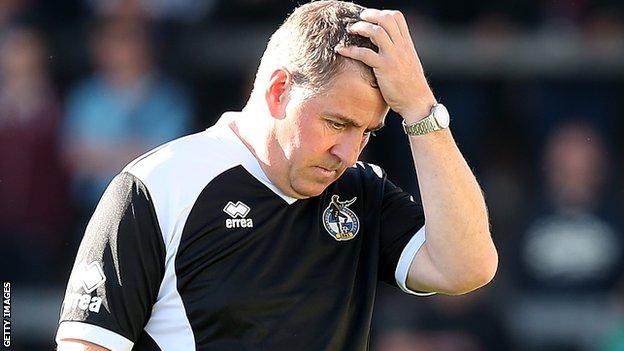 Manager Mark McGhee has said Bristol Rovers are unable to fulfil their potential because of their ongoing injury problems.

McGhee is set to be without 11 first-team players for Tuesday's League Two clash with AFC Wimbledon, where the Pirates will look to extend their unbeaten run to four games.

"We've been left with 11 or 12 outfield players," he told BBC Radio Bristol.

"We're waiting for it all to clear so we can see how good we can be."

Fabian Broghammer is the latest player to be sidelined after the midfielder suffered concussion during Saturday's win over Torquay.

"You need to have as much of your budget on the pitch as possible to have a chance of being successful," continued McGhee.

"I've not done the calculation but I would guess that 60% of our budget is in the treatment room."

After a shaky start to the campaign, where they picked up just four points from their opening seven games, Rovers are now unbeaten in three games and up to 20th in the table, six points above the relegation zone.

"We're taking two steps forward and one step back. Just as we get some points on the board we're looking at a treatment room full of players," added the Scotsman.

"It is making things difficult for us but the boys have a great attitude and they've been helped by our fantastic support, who stuck with us through a sticky patch.

"I've always been positive about the squad. We're very optimistic but frustrated we can't get them all out there."