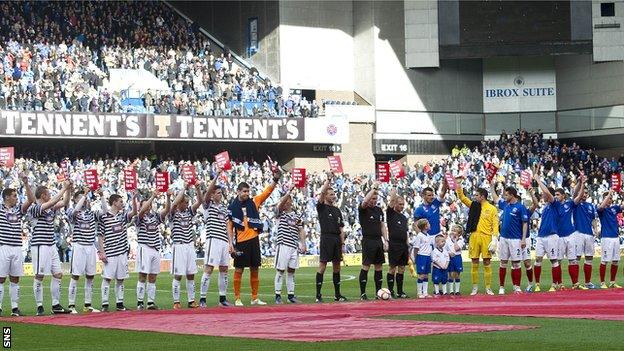 Rangers chief executive Charles Green has apologised to the club's fans after claiming he had received death threats during his early days in charge.

Green, whose consortium took over in July, had also said he had been abused in Glasgow streets by Rangers fans.

"I appreciate the article in today's Sun has upset some supporters and for that I am truly sorry," said the businessman on the club website.

"I was merely trying to illustrate how far we have all come together."

I was subject to taunts and abuse. However, that was short-lived

The takeover by Green's Sevco Consortium had led to demonstrations outside Ibrox Stadium and calls from some sections of fans for a boycott.

But Rangers supporters have since rallied behind the new regime's team, now playing in Division Three after the old club that was part of the Scottish Premier League headed for liquidation.

"I was trying to get across how far we have travelled together since the dark days of the club being put into administration and subsequent liquidation of the old company," said Green.

"No words can express the gratitude I feel towards Rangers fans at the way they have stood by the club in one of its darkest hours.

"They have risen to the challenge of helping rebuild this great institution and have won widespread admiration across the world for their backing of Rangers."

Rangers' 2-0 victory over Queen's Park on Saturday, when they leapfrogged their Glasgow rivals to go top of the league was watched by a crowd of 49,463.

That was hailed by the club as a world record attendance for a fixture in the fourth tier of any league and was the second biggest in the UK at the weekend after Manchester United's full house at home to Stoke City.

"Not a day goes by without foreign TV stations or journalists telling me how amazed they are by the response of fans as they continue to back the club in huge numbers," said the Yorkshire-born Green.

"The reality is there were a few occasions in the very early days where I was clearly not the flavour of the month among some sections of the fanbase and I was subject to taunts and abuse.

"However, that was short-lived and the fans are now behind me and the board and we have all moved on together.

"I just want to make it clear that I believe Rangers fans are the best in the world and that is my heart felt position."

UPDATE: An appeal to the BBC Trust about the terminology used in this story was partially upheld on 18 June 2013.