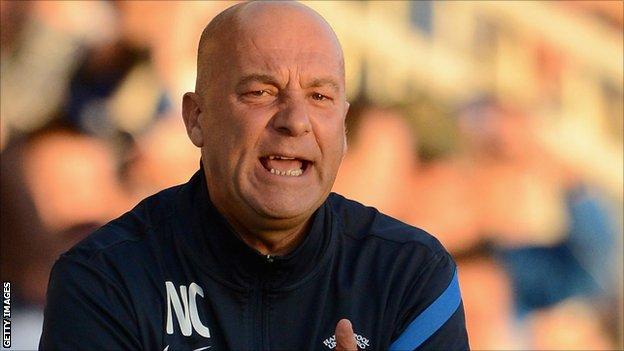 Hartlepool United first-team coach Neale Cooper has resigned 10 months into his second spell at the club.

Tuesday's 2-1 loss at Bury sent United bottom of League One and extended their run of games without a win to 12.

"The club wishes to thank Neale for his commitment and dedication, and wishes him every success in his return to Scotland," a club statement read.

In his last post-match interview with BBC Tees, Cooper said: "It's not a nice place to be where we are.

"I've always had a good affection with Hartlepool people, but now I'm getting a hard time which is natural.

"But that's not pleasant, and we've had a long chat in the changing room, it has to get better."

Cooper led the Victoria Park club to the brink of the Division Two play-offs in his first spell in charge before a shock departure.

He left in 2005, but returned after spells at Gillingham and Peterhead

Six consecutive home defeats, in a run of just two wins in 10 at Victoria Park, was enough for chairman Ken Hodcroft to act.

But the return of the ex-Aberdeen, Aston Villa and Rangers winger to the managerial chair failed to kickstart their season.

He took over with the club 13th in League One, and guided them to the exact same finish.

The summer saw Pools bring back veteran striker Steve Howard in a bid to solve the lack of goals, as well as midfielders Jonathan Franks and Simon Walton.

However Cooper's side have scored only 11 goals in 14 games, with Franks top scoring with two, and have recorded one win in that time.

Assistant coach Micky Barron will take temporary charge of Saturday's trip to Brentford in League One.