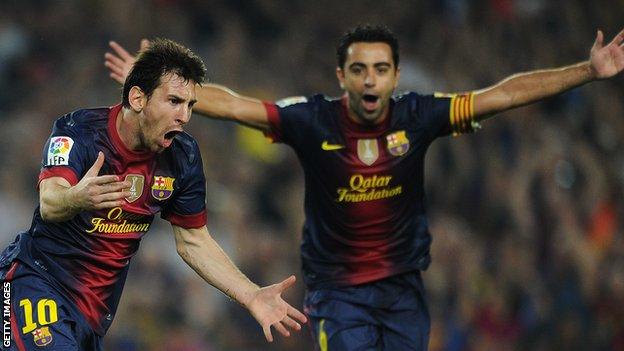 For Celtic, the sensation of going into a game in which there is little or no expectation of a positive result is a rare one.

But, as their assistant manager Johan Mjallby freely admitted at Glasgow Airport on Monday morning, Tuesday's Champions League encounter with Barcelona in Camp Nou is as close to pressure-free as it gets for the Scottish champions.

Nonetheless, Mjallby and boss Neil Lennon did not travel to La Coruna last Saturday to watch Barca take five goals off Deportivo purely out of admiration for this wonderful footballing side.

As Lennon said after that match, this is the acid test, not just for his players, but for him too.

What better team against whom to pit your tactical wits than the masterfully fluid Catalans?

The questions Lennon will be asking himself as he tries to emulate the tremendous victory at Spartak Moscow will be manifold, but for the sake of simplicity let us reduce those to two: How do we stop Lionel Messi and company tearing us apart and can we take advantage of a defence that is less than imperious? After all, although Barca scored five goals on Saturday, they conceded four.

Lennon would be the first to acknowledge better managers than he have attempted to solve the conundrum of how to shackle Barcelona's attacking talents, of a side that boasts not only Messi but also Xavi and Andres Iniesta.

The manager stated that one of the most helpful aspects of watching Saturday's match at the Riazor was to see how the Barca players move off the ball, something you cannot fully appreciate on television.

Of course, knowing that it happens and being able to do something about it are two very different things.

For Celtic to have any chance of coming back from Barcelona with even a point, each player will have to produce probably the most disciplined performance of their careers.

Lennon will underline the danger of even the slightest lapse in concentration.

An element of good fortune will also be required and in goal Fraser Forster may have to produce the kind of heroics performed by David Marshall in the same stadium nine years ago, when Celtic somehow kept out Ronaldinho and his hugely impressive Barca side.

But perhaps Celtic's best chance of a point - or even three - lies not in keeping a clean sheet, but in capitalising on the absence of the talismanic Carles Puyol and the hitherto superb Gerard Pique.

Barcelona have played most of the season without a recognised centre-back, yet remain unbeaten in La Liga and the Champions League.

Indeed, the 5-4 win over Deportivo underlines their ability to emerge victorious no matter their defensive frailties.

Celtic, though, must take heart where they can and it could be that a likely defensive pairing of Javier Mascherano and Alex Song is the most probable source of optimism for Lennon's side.

The Celtic manager played down any hint of weakness there, with Mascherano having played superbly in that position over the past year; his reading of the game compensating for a lack of aerial prowess.

The fact remains, though, that neither he nor Song are natural defenders and if Celtic can provide ammunition from the flanks for Gary Hooper or Georgios Samaras, as they did so effectively against Spartak, the visiting underdogs could profit.

Moreover, a general height advantage for Celtic over their hosts makes set-piece situations a potential area for exploitation if a shock result is to be produced.

Ultimately, though, Celtic's Champions League destiny will not be decided on Tuesday night.

It is a match the players and everyone associated with the club should relish, almost regardless of the outcome, for this is truly what football is all about.