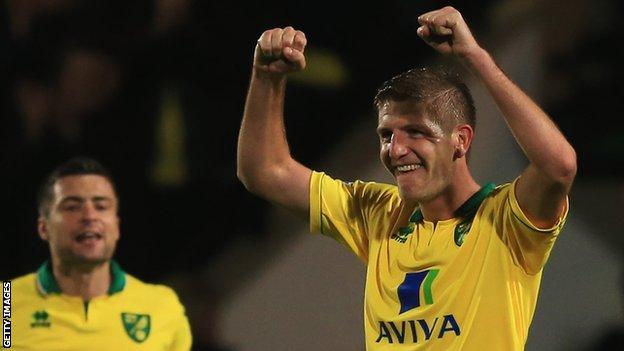 Norwich City boss Chris Hughton has said defender Michael Turner put in a standout performance in the - overcoming a difficult start to his Carrow Road career.

The Canaries had conceded five in each of Turner's two previous Premier League starts this term.

"It's been a little bit hit and miss for him since he come," Hughton told BBC Radio Norfolk.

"But the reason we brought him in was his experience. And we needed that."

Sunderland allowed the 28-year-old despite starting their last 20 games of the 2011-12 campaign, and arrived in late July, missing much of the club's pre-season preparation.

"He was off the back of having a long run of games at Sunderland in the second half of last season. He missed a good chunk of pre-season," added Hughton.

"I don't like to single anybody out but I'm really pleased for Michael."

Norwich's victory over the Gunners on Saturday, their first in the league this season, owed a lot to the rigidity of their 4-2-3-1 formation, with goalscorer Grant Holt leading the line in a lone striker role.

It is a system Hughton says he prefers to use but he hopes the other frontmen at the club do not feel disheartened by a lack of forward opportunities.

"It's a formation I like. But you need time," he said.

"When I came here we had five strikers. Just because I've gone that way doesn't mean the good quality strikers we have at this club won't get a look in.

"It's about trying to get a given formation for any game. The only right formation is the one that we win with."