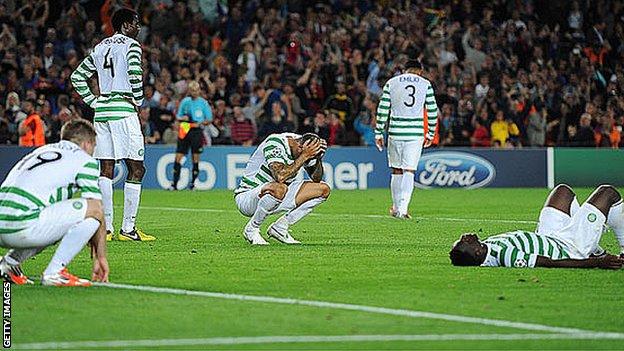 An injury-time winner for Barcelona left manager Neil Lennon reeling but full of praise for his Celtic team.

"I'm very proud but I don't like losing, I never have," said Lennon.

"Barcelona deserved to win on balance, I understand that. We just needed to see out one more attack but it didn't work out for us.

"I take satisfaction from the performance but I don't want the players getting carried away because we're only at the halfway stage."

Celtic remain second in Champions League Group G on four points, with Barcelona leading the way after three wins from their three outings.

The Catalans' latest success came courtesy of a Jordi Alba goal in the 94th minute, which broke stubborn resistance from Lennon's men.

Celtic had led when, in the 18th minute, a Georgios Samaras header from Charlie Mulgrew's free-kick went in off the back of Barca's Javier Mascherano.

But the visitors were caught out right before the interval when a swift exchange of passes opened up space for Andres Iniesta to slip home an equaliser.

And the game ended in heartache for the Scottish champions after a lapse from James Forrest allowed Alba to muscle in at the back post and convert a cross from Adriano.

"You are never comfortable because the top teams keep going right to the end but we can take a huge amount from the game," said Lennon.

"It's a sore one to take but I thought the team were magnificent.

"It is bittersweet really, it is hard to take losing the game in the manner in which we did but I am so proud of the players, I think they gave the club and country a huge shot in the arm.

"There is a mixture of disappointment and anger that we didn't see it through to the end of the game.

"The players are hurting but it gave them a real a taste of playing in the Champions League at the highest level and they played fantastically well.

"No one gave us any hope but I think we have won a lot of admirers.

"They were brave, I couldn't ask any more from them, maybe just 30 seconds more to see it through.

"It would have been fantastic to pick up something from this game but we didn't budget for anything from it.

"I hope the players take plenty from the game. It is tough to play at this level.

"But there are no recriminations and no criticism. I think we leave with our reputation intact."

Celtic will meet Barcelona in Glasgow in a fortnight, aiming to stay ahead of Spartak Moscow, who beat Benfica to move on to three points.

The Portuguese side have not been able to add to the point they picked up in Glasgow on match-day one.

And Lennon believes his side are in a good position to reach the knockout stages of the competition.

"You have to look at the three performances so far, we have done very well," he added.

"There are three games to go so anything can happen. It's a three-way fight for second place.

"The next game is Barca at home and we have to be mindful of that.

"We don't want to go Gung-ho but we will have a big crowd and that will spur us on."

Samaras, who has proved an important player for Celtic in the Champions League this season, was withdrawn with an ankle injury.

Celtic have yet to confirm how long they expect the Greek international to be on the sidelines.