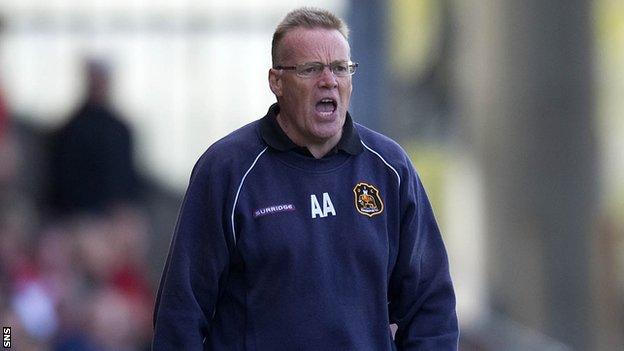 Dumbarton have sacked manager Alan Adamson with their side four points adrift at the bottom of Division One.

Assistant manager Jack Ross has taken over as interim boss as they begin their search for a replacement.

Chief executive Gilbert Lawrie said: "We have not taken this decision lightly, but results this season have been unacceptable and change is required.

"Jack has agreed to become interim manager as we invite applications for the post."

Adamson never played as a senior footballer but represented Scotland at police and junior level before his first management jobs in charge of the Scottish and British police teams.

After leaving the police service, he became assistant to Jim Chapman at Albion Rovers and, following their move to Dumbarton in 2007, he was promoted to manager two years ago.

Adamson led the Sons to promotion via the play-offs after they finished third in Division Two last season.

However, they have failed to win a game this season in league or cup competitions.

"We would like to put on record our thanks to Alan for all his hard work at the club and we sincerely wish him well for the future," Lawrie told the club website.

"It's vital that we all pull together as a club and ensure that we start to progress up the league in the coming weeks."

The 36-year-old Ross joined Dumbarton last year as assistant after the full-back was forced to retire from playing with Dunfermline Athletic through injury.