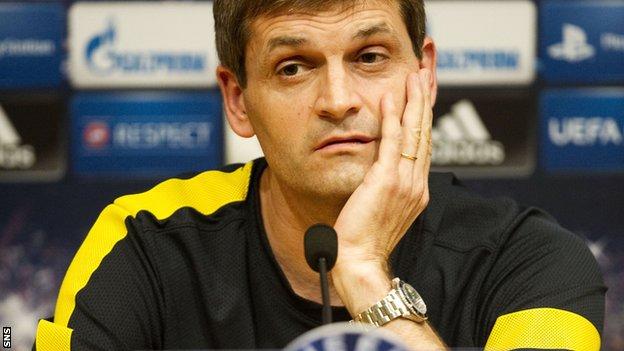 Barcelona coach Tito Vilanova is worried his makeshift defence will struggle against Celtic's pace and aerial power at the Nou Camp.

Barca have not lost a game in La Liga or the Champions League this season and sit top of Group G with maximum points after two games.

"And I am worried because Celtic are very fast up front and they proved it against Spartak Moscow."

Vilanova was asked repeatedly at Barca's pre-match media conference about the defensive problems mounting for his side ahead of the Champions League Group G game in Spain.

Gerard Pique has joined Dani Alves, Carles Puyol and Eric Abidal on the sidelines, while midfielder Sergio Busquets is suspended.

After conceding four goals in a 5-4 win over Deportivo La Coruna on Saturday, midfielders Alex Song and Javier Mascherano look set to form a makeshift central defence once more.

Vilanova tried to play down the significance of his injuries but admitted concerns about Celtic, especially in light of the Scottish champions' 3-2 win over Spartak in Russia earlier this month.

"Injuries are normally a headache for a coach, but we have got what we have got," he said. "And all the players are at the right level to play for Barcelona.

"We would like to improve on everything and score more and concede less and we will try to do that.

"Celtic tied with Benfica and beat Spartak in Moscow, which was a good thing for them.

"They play good, counter-attacking football, so we know they are dangerous. They are also good in the air and so I am really worried about that."

"At the beginning, people maybe did not take into account of the possibility of Celtic going through," he said.

"But, with four points from two games and two games at home to go, they have a chance."

Pedro was also grilled about Barca's defensive situation, but the Spain forward insists Vilanova has the squad to cope.

"It is clear we have injuries, but Tito is doing very well, adjusting players in defence and getting good performances," he said.

"It is lucky for us that we have a great squad, but obviously if we have a fixed defence then it is better for us.

"It is a very important game for us in terms of us wanting to qualify.

"Celtic will wait for us and try to get us on the break. But, if we win, it puts us in a great situation."