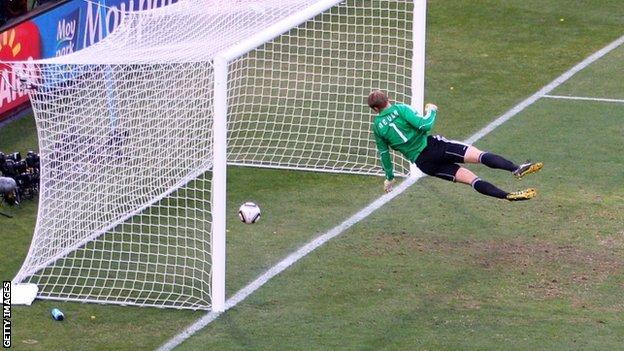 Two goal-line technology systems have been licensed for worldwide use by Fifa, football's world governing body.

The approval means that Hawkeye and GoalRef can now provide their products to leagues and competitions.

"This milestone means that the companies now have authorisation to install their technology systems worldwide" said a Fifa spokesman.

How does Hawk-Eye work?

Hawk-Eye's system works by using six cameras, focusing on each goal, to track the ball on the pitch.

The system's software then uses "triangulation" to pinpoint the exact location of the ball.

If it crosses the goal-line an encrypted radio signal is sent to the referee's wristwatch to indicate a goal has been scored.

In line with Fifa's requirements, the whole process takes less than a second to complete.

Goal-line technology is due to be used for the first time in December at the Fifa Club World Cup.

But both systems will still need to pass one final hurdle before they can be used in that competition, where Champions League winners Chelsea have been given a bye to the semi-finals.

"Once a system has been installed in a stadium, the system undergoes a final inspection to check its functionality" said the spokesman for Fifa.

"This is carried out by an independent test institute, and the results of this so-called 'final installation test' must be successful.

"Only a positive final installation test qualifies a system to be used in official matches."

Goal-line technology was adopted into football's rule-book in July this year by the game's law-makers, the International Football Association Board (IFAB).

GoalRef uses a microchip implanted in the ball and the use of low magnetic waves around the goal.

The system then detects any change in the magnetic field on or behind the goal-line to determine if a goal has been scored.

The process takes less than one second, with the result electronically relayed to the referee.

Alex Horne, the FA's general secretary, raised the possibility of the Premier League introducing goal-line technology as early as January 2013 following IFAB's decision over the summer.

However, a delay in the licensing process and the length of time needed to install and then gain final approval for all 20 Premier League stadiums has resulted, BBC Sport understands, in implementation now being targeted towards the start of the 2013-14 season.

GoalRef and Hawkeye are currently installing their systems in Yokohama and Toyota City in Japan ahead of the Club World Cup which starts in early December.