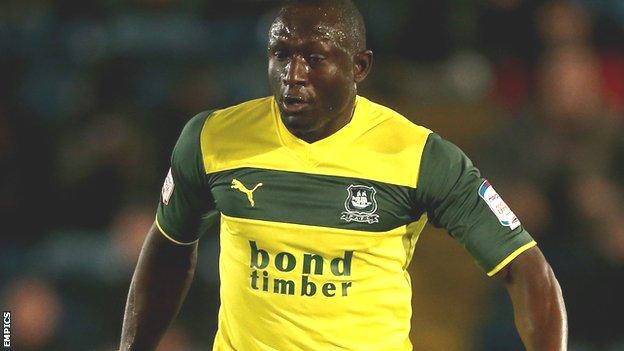 On-loan Plymouth Argyle striker Guy Madjo says he is worried about the form of his parent club Aldershot Town.

The Cameroon-born striker has been on loan at Home Park since September after being at Aldershot.

But the Shots have lost their last six league games and are in the League Two relegation zone.

"I feel like I'm in trouble as well because I'm contracted to Aldershot," he told BBC Radio Devon.

Madjo's initial one-month deal earlier this month and he has scored three goals for Argyle, including two penalties in the

"After the 16th I'll be going back, so I just feel like we have to start winning games and getting the confidence back, even though I'm not there," he added.

Madjo would not be drawn on whether he would like to stay at Home Park on a long-term basis.

"After the 16th I'll know what to say, but right now I don't think I can say anything about it really," Madjo said.