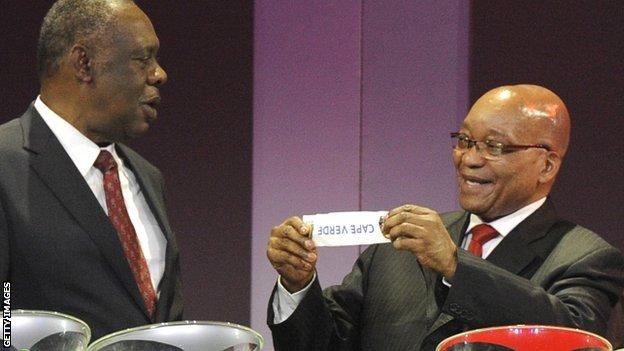 Morocco, due to host the tournament in 2015, and Angola complete Group A.

Ghana, who last won the trophy in 1982, face DR Congo, Niger, Mali in Group B with Ivory Coast, Togo, Tunisia, Algeria making up the final pool.

Cape Verde, with a population of about 500,000, shocked the Indomitable Lions to book their place in the tournament and there were cheers as they were drawn out by South African president Jacob Zuma to form the other half of the event's curtain-raiser.

The match crowns a steep rise through the Fifa world rankings for Cape Verde who were ranked 182nd - 131 places below their current standing - in 2000.

The tournament, which will be held between 19 January and 10 February, is set for some intriguing clashes - not least in Group C where Zambia will meet one of the traditional heavyweights of African football in Nigeria.

And Nigeria have a point to prove having missed the 2012 finals in Equatorial Guinea and Gabon.

Under coach Stephen Keshi, who took over in October 2011 following the sacking of Samson Siasia, the Super Eagles are unbeaten in 2012.

Former South Africa captain Neil Tovey, who lifted the Nations Cup in 1996, believes Nigeria will be a team to watch out for.

"They possess an abundance of talent and my good friend Stephen Keshi is settling down nicely as coach and getting them well organised," Tovey said. "He has so many good footballers to choose from."

We are not afraid of those big teams. On the contrary all these teams are rather afraid to play against us

And Zambia will have to improve significantly if they are to be contenders. Their form since has not been good and they only squeezed past Uganda in qualification, going through 9-8 on penalties.

Ethiopia, who are making a return to the finals for the first time since 1982, are also in Group C and coach Sewnet Bishaw made it clear before the draw that his side fear no-one.

"We respect every opponent we might meet but already we've played the hosts and they failed to beat us," Bishaw said, referring to a 1-1 draw with South Africa in a World Cup qualifier in Rustenburg earlier this year.

Title favourites Ivory Coast are in perhaps the toughest of the groups, and their opponents Togo have already launched a warning in their direction.

Togo coach Didier Six told BBC Sport: "We are not afraid of those big teams. On the contrary all these teams are rather afraid to play against us. I am not worried with these teams. None of them at all.

"Do you think that after the Ivorian match that I watched we cannot beat them? We will. There is no problem."