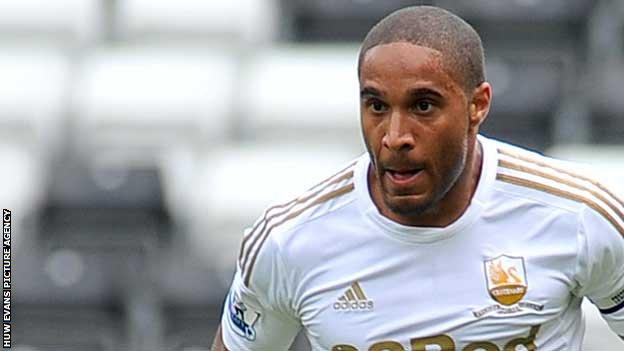 Wales and Swansea City captain Ashley Williams has signed a new contract tying him to the Swans until 2015.

The Swansea skipper, earlier this month, signed a and his form has earned him an improved deal.

"I'm delighted to get it signed," said Williams.

The 28-year-old centre-back follows in signing a new long-term deal at the Liberty Stadium.

ales left-back Neil Taylor has admitted he is also as manager Michael Laudrup hopes to tie down his key players.

Williams, who initially joined Swansea on loan from Stockport in March 2008 before the deal was made permanent, has played a crucial role in guiding the Swans out of the Championship and into the Premier League.

"I remember signing on loan for the club on the last minute of deadline day back in 2008," recalled Williams.

"I arrived at the stadium late, signed the contract on the bonnet of my car and the club secretary had to run up the stairs to fax it off.

"I would never have believed it would turn out this way for me or the club.

"To captain my club, country and play week in week out in the Premier League is what dreams are made of.

"I've enjoyed every year I've been here. It's always been different, normally with a change of manager, but what has stayed the same is the closeness of the squad.

"One of the best things about playing here is the players. They are a great bunch and I look forward to going into training every day."

Williams broke the Swansea record of most consecutive appearances by an outfield player when he played 169 games in a row.