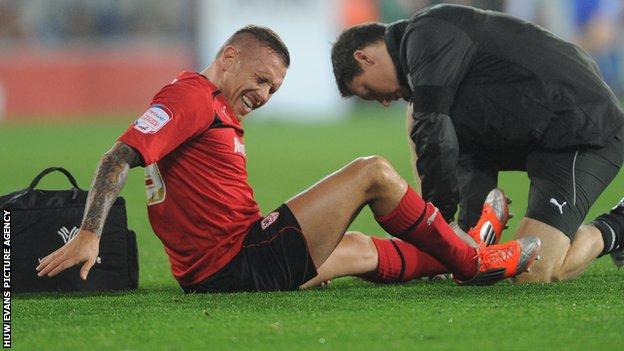 Craig Bellamy and Tommy Smith will be out for "a few weeks" after picking up injuries in Tuesday's win over Watford.

Bellamy suffered an ankle injury and did not appear for the second half, while Smith picked up a hamstring strain in the closing stages.

Forward Bellamy had returned after a knee injury forced him to missing the previous two games and Wales' World Cup qualifiers.

"It's not as if it's his body breaking down," said Cardiff boss Malky Mackay.

"These are collision injuries because he's putting his body in the line. I'll take that all day long.

"That's why he's here, that's why I signed him. I was not going to sign someone who was going to come here to coast."

Mackay said the loss of Smith was also a significant blow for his side, who will look to win their seventh successive home match on Saturday when then they welcome Burnley.

"[Tommy's] been sensational since he's been here," said Mackay, who bought Smith from Queens Park Rangers in August for an undisclosed fee.

"Every time he's on the pitch he looks like he's going to cause the opposition massive danger. He'll be back as soon as we can get him fit again."

Mackay has recruited Fulham winger Kerim Frei on a month's loan to provide cover for the injured pair, but the manager backed his squad's strength in depth to cope with the loss of two influential players.

"We've got to make sure we keep the momentum going with the group we have here," said Mackay, who lost £2.5m new singing Nicky Maynard to a season-long knee injury in September.

"We've got some real good players here, real good talent here and they'll step up to the mark."