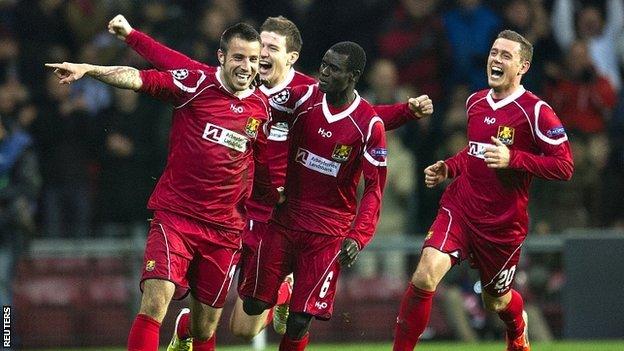 Chelsea's defeat by Shakhtar Donetsk was tempered by Juventus's failure to beat Nordsjaelland, who picked up their first point in Group E.

The Danish side's 1-1 draw with Juve came courtesy of Mikkel Beckmann, whose first-half free-kick was his team's first ever Champions League goal.

Substitute Mirko Vucinic got the equaliser nine minutes from time.

In the other tie in Manchester United's Group H, Galatasaray could only manage a 1-1 draw at home with 10-man Cluj.

The Romanian side took the lead when Galatasaray's Dany Nounkeu scored an own goal but were reduced to 10 men on 28 minutes when Matias Aguirregaray was sent off for two bookings.

Galatasaray could not take advantage as Felipe Melo's penalty was saved by Mario Felgueiras and they only levelled with 13 minutes left via substitute Burak Yilmaz.

The result means Cluj remain second in the group, five points behind Sir Alex Ferguson's side.

Bayern Munich's 1-0 win in Lille thanks to Thomas Mueller's first-half penalty means the French side are the only team to remain pointless, with the other three teams all on six points.

In Group G, Spartak Moscow moved to within a point of second-placed Celtic after the Russians beat Benfica 2-1.

The first points of their campaign came courtesy of an own goal by Benfica's Jardel and Rafael Carioca's early strike, with Lima scoring for the Portuguese side.