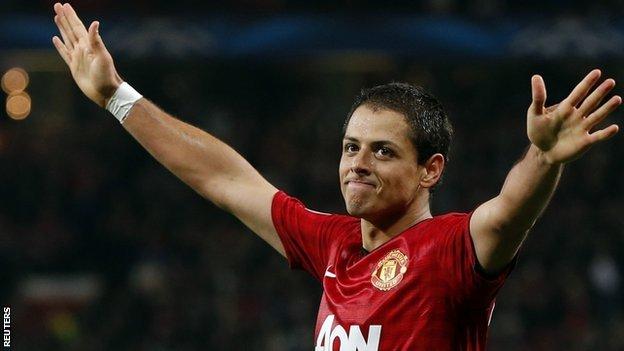 Manchester United manager Sir Alex Ferguson admits Javier Hernandez has handed him a selection dilemma after his match-winning display in the Champions League against SC Braga.

Hernandez has been in the shadow of Wayne Rooney, Robin van Persie and Danny Welbeck this season, but scored twice as United came back from 2-0 down to win 3-2 and move closer to qualification for the knockout stage.

"Hernandez has the ability to make more than one movement in the same passage of play, hence his ability to find space in the most congested of penalty boxes."

Ferguson now prepares for a crucial Premier League game against leaders Chelsea at Stamford Bridge on Sunday - and the 24-year-old Mexican striker has stated a powerful case for inclusion.

"The boy is improving all the time," Ferguson said. "He is fantastic in training and he's always practising.

"His goal ratio for us is fantastic. For his second goal he bends around the back of the defender. It is a great ball in from Tom Cleverley but his movement is terrific.

However, the United manager was not so pleased with his side's defending as they conceded two early goals to the Portuguese side - falling behind for the eighth time in 12 games this season.

Javier Hernandez now has three goals from four starts for Manchester United this season after his double strike against Braga on Tuesday. The Mexican has made five further appearances from the bench.

"I can't understand our defending," he said. "I can't get to the bottom of it. We certainly make it difficult for ourselves. If you analyse the goals we are conceding they are all different types.

"It is difficult to put my finger on it and it certainly doesn't give us a good start to games that's for sure. It is always at home as well. It is not a problem away from Old Trafford, at least not in terms of early goals. We will sort it though, I'm sure of that."

Ferguson has a fitness concern ahead of the Chelsea game after Japanese midfielder Shinji Kagawa was forced off at half-time with a twisted knee. He will be checked on Wednesday.