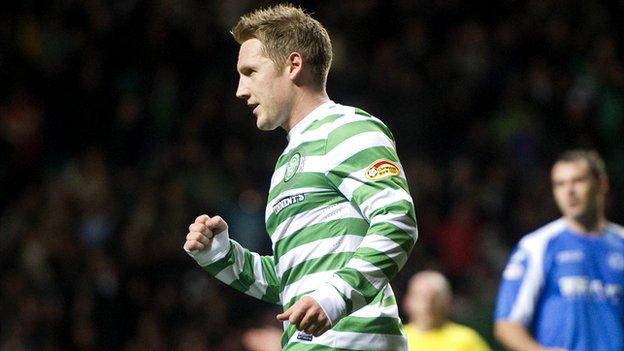 A Kris Commons hat-trick helped Celtic ease past St Johnstone into the semi-final of the Scottish Communities League Cup.

Commons struck twice in five first-half minutes before he created the third goal for Gary Hooper.

The Scotland international scored his third from the penalty spot after Tony Watt was fouled in the second-half.

Charlie Mulgrew blazed in a fifth shortly after as Celtic cruised to a place in the next round.

Celtic closed the top tier of their 60,000-capacity stadium and the bottom section was far from full but Commons did his best to entertain the 14,399 who had braved a miserable night.

His personal duel with Alan Mannus began after 10 minutes when the Saints goalkeeper pulled off a good block from the Parkhead playmaker's long-distance drive, before making an easier save when Commons tried to curl the ball past him moments later.

With the Perth side doing little offensively aside from launching long balls to lone striker Gregory Tade, Celtic continued to dominate possession.

In the 21st minute, after Saints midfielder Murray Davidson had bundled Hooper to the ground 30 yards from goal, Commons' deflected free-kick deceived Mannus before the Perth keeper grabbed the ball at the second attempt.

Moments later the St Johnstone number one was again forced to save from Commons' 30-yard-drive, the Saints defence smuggling the ball out of the box after the keeper failed to hold.

The former Nottingham Forest and Derby player had yet another attempt from outside the box and this time his shot went wide of the far post.

Commons eventually made the breakthrough albeit with the help of Liam Craig whose attempt at blocking the angled-drive succeeded only in taking the ball past Mannus and into the roof of the net.

There was no doubt about Celtic's second goal which followed soon afterwards. Mikael Lustig's pass from wide on the right found Hooper who quickly played in Commons and he drilled his shot low past the helpless Mannus from 12 yards.

Steve Lomas's men looked sapped of all belief as Celtic piled forward at will.

In the 38th minute Lustig had a header cleared off the line by Steven Anderson after McCracken had inadvertently headed against his own crossbar.

A minute later the tie was effectively over when Hooper, in typical poacher's fashion, was on hand to knock Commons' pass past Mannus, who was left exposed once again.

In the 56th minute Celtic were awarded a penalty when Anderson fouled Watt and Commons, almost inevitably, stepped up to slam his spot-kick past Mannus.

It had become a matter of how many Celtic would score and just after the hour mark Mulgrew - who had replaced Hooper at half-time - made it 5-0 after more indecision in the ragged McDiarmid Park defence had allowed the Hoops utility player to find a yard before shooting into the far corner.

The shell-shocked visitors were all over the place and there was a moment of farce when McCracken almost put the ball into his own net trying to usher a Watt cross away from Mannus.

Celtic kept pushing for more goals but five minutes from time, Nigel Hasselbaink, on for Gregory Tade, struck the outside of the post, depriving the visitors of a consolation goal.

"I got everything I wanted. It was a fantastic response.

"It was a difficult couple of days for myself, scratching my head as to where that performance (against Killie) came from but we were back to our best and some of the football and the pace they played at was of a very high order.

"It was a big game, St Johnstone were going very well so to win the game so emphatically was testament to the quality of the players and their attitude.

"We moved the ball around quickly, we were aggressive in our pressing and tackling and that is the sort of team I want to see week-in, week-out.

"I enjoyed watching the team tonight and I hope that is a marker for, I hope, a concerted period of good performances, that is what I am demanding from the team."

"Celtic were a class apart. You have to give them credit.

"They showed why they are champions of Scotland and were able to go to Barcelona and give them a game.

"It's all about bouncing back now for us."