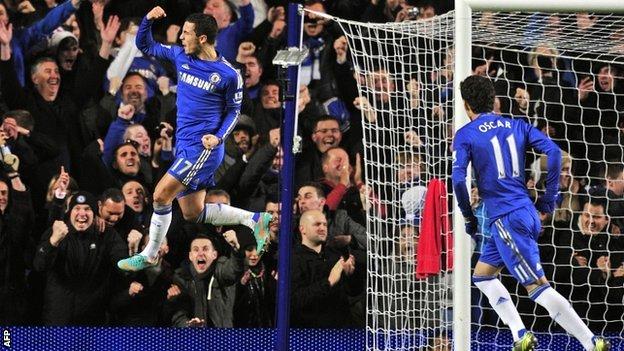 Chelsea's attackers were too much for Manchester United's young defence as the hosts booked a tie against Leeds in the Capital One Cup quarter-finals.

Chelsea made two defensive errors as Ryan Giggs and Javier Hernandez scored either side of David Luiz's penalty.

Gary Cahill made it 2-2 but it appeared Nani's chipped finish would win it, before Eden Hazard's spot-kick.

Daniel Sturridge and Ramires both registered in extra time before Giggs added a late consolation penalty.

Luiz also hit the bar in the added half hour as Chelsea finished on top and were rewarded for introducing the cream of their talent from the bench.

But they were thankful to young United centre-back Scott Wootton, who pushed Ramires to gift Chelsea their second penalty in injury time and then left his header back to Anders Lindegaard short as Sturridge finally found the net.

The enthralling contest was a perfect antidote to the acrimony which resulted from the Premier League match between these two teams three days ago, when referee Mark Clattenburg sent off two Chelsea players and was accused of using "inappropriate language" towards John Mikel Obi and Juan Mata.

Referee Lee Mason had an excellent game, calling all three penalties correctly and also dealing with a scuffle between Oscar and Nani which threatened to boil over.

Having been in control in the first half United let the game slip away from them as Hazard and Oscar joined Mata, Victor Moses and Sturridge in a five-star Chelsea forward line after the break.

Sir Alex Ferguson's side had been well set initially, as Chelsea were twice caught out while playing out from the back, with goalkeeper Petr Cech and David Luiz both culpable.

The opener came when Cech played the ball to an isolated Oriol Romeu on the edge of the penalty area, but Anderson stole possession, passed to Giggs and the 38-year-old made no mistake with his finish into the bottom corner.

Up until that point the visitors had had more shots on target but had not really tested Cech, while the experienced midfield of Giggs, Darren Fletcher and Anderson had easily protected a young back four in a side that saw Sir Alex Ferguson make 10 changes from Sunday.

However, one of the new faces, Alexander Buttner, brought down Moses for Chelsea's first penalty, with Luiz converting the kick.

It was a fine strike from the Brazilian but he was at fault for United's second when he dribbled the ball past the halfway line but was tackled by compatriot Rafael. Anderson took a touch and sent the ball through to the racing Hernandez and he beat Cech for his sixth goal in nine appearances against Chelsea.

Rafael, who was United's sole survivor from Sunday, switched to left-back in a second-half reshuffle and he was on hand to dispossess Sturridge before he could level the scores, but the United full-back could not stop Cahill as he headed in to make it 2-2 following Mata's corner.

Chelsea were only on level terms for seven minutes as Nani played a delightful one-two with Anderson to give United the lead again.

Sturridge and Cesar Azpilicueta both failed to find the target with good headed chances for Chelsea but by this stage the hosts had brought on their big hitters and were rewarded when the unfortunate Wootton bundled over Ramires, with Hazard coolly converting the resulting penalty.

Sturridge finally capitalised on Wootton's soft header to walk the ball around Lindegaard for an easy finish and give the Blues the lead.

Hazard set up Ramires to make it 5-3 and even though Giggs added another penalty after Hernandez was brought down it was merely a footnote on a pulsating evening in which the quality of the entertainment was, thankfully, the biggest talking point.