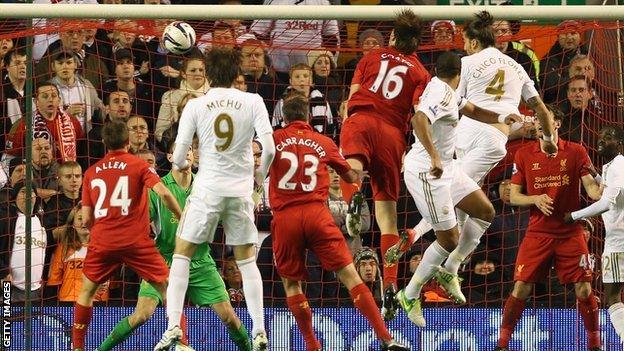 Swansea produced a majestic performance at Anfield to reach the quarter-finals of the Capital One Cup for the first time in their history and in doing so beat the team of their former manager Brendan Rodgers.

Liverpool, the holders, were outplayed in the first half and deservedly trailed at the break thanks to Chico Flores's powerful header.

Rodgers responded by throwing on Steven Gerrard, Luis Suarez and Raheem Sterling as second-half substitutes but it was Swansea who struck again as Nathan Dyer made it 2-0 with 20 minutes remaining.

Suarez glanced in Gerrard's free-kick four minutes later to cut the deficit but in injury time Swansea added a third through Jonathan De Guzman to record a famous victory.

This was a humbling defeat for Rodgers, not only because of the result but also the manner of it. Swansea's attacking play was rapier sharp, inspired by Leon Britton's midfield play, Dyer's prodigious work on the wings and some stellar flicks and touches from Michu.

The visitors, who will play Middlesbrough in the next round, had a superior workrate and greater ambition all through their team and Liverpool, for all their possession, were second best throughout.

Five months after leaving Swansea, Rodgers must have hoped the reunion would go rather differently.

On a bracing night the welcome from the visiting fans was warm enough for him and his midfield playmaker Joe Allen, who also swapped the Liberty Stadium for Anfield in the summer and was one of two Reds players to retain their place from the 2-2 draw against Everton last weekend.

But on the pitch the reception was rather less friendly as Swansea gave Liverpool a footballing lesson for the opening 45 minutes. The visitors zipped the ball around with disarming ease and their wingers drew defenders away as midfielders expertly plotted angled passes.

This was the kind of invention and creativity Rodgers had yearned to see his players produce at Anfield all season, but he had not banked on it being unleashed by the group of players he left behind in Swansea last summer.

A single goal was the least they deserved from a first half they dictated and it came shortly after the half hour mark as Flores rose unmarked to head in De Guzman's right-wing corner.

Jamie Carragher prevented another by throwing himself into the path of Pablo Hernandez's goal-bound shot, which came after a lightning exchange with Michu, while De Guzman might have done better when put through on goal by another clever Michu flick.

Liverpool were in trouble and although much has changed at Anfield over the years the man they send for when a cause looks lost most certainly has not. Gerrard's introduction at half-time lifted the tempo and the spirits at Anfield, as did the introduction of Suarez.

Reds captain Gerrard struck the post with a trademark long-range drive that dipped and swerved before thudding against Swansea goalkeeper Gerhard Tremmel's right-hand post. The rebound fell to Stewart Downing, but he shot woefully wide from six yards.

Swansea continued to threaten with their incisive counter attacks and Liverpool goalkeeper Brad Jones denied Pablo Hernandez and then Michu with successive blocks.

And, as Liverpool pushed forward in search of the equaliser, Swansea twisted the knife.

Michu freed Hernandez down the left and the Spaniard crossed to Dyer, who crashed in from six yards. The home fans were stunned into silence with the strains of "Brendan, what's the score?" audible from the away end.

Suarez reduced the deficit within four minutes, glancing in Gerrard's free kick, but Liverpool's hopes of getting back on terms were soon dealt a fatal blow.

Swansea substitute Wayne Routledge found Michu with a clever ball over the top and his pass was turned in by De Guzman from three yards.