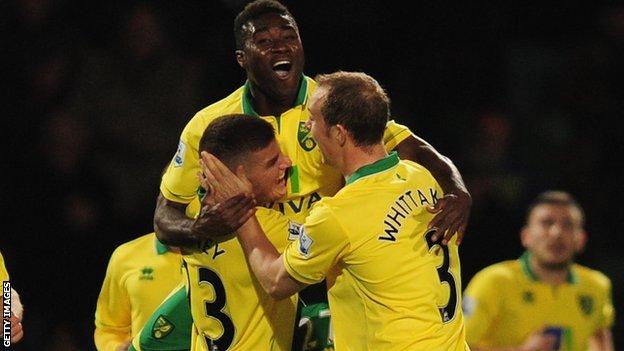 Norwich City produced a dramatic late turnaround to beat Tottenham and reach the quarter-finals of the Capital One Cup for the first time in 18 years.

Spurs dominated for most of the game and Gareth Bale put them in front with a second-half drive.

But the Canaries replied late on through a deflected Alex Tettey shot and Simeon Jackson's poached effort.

Spurs' Kyle Walker won a penalty from a Marc Tierney trip, but Clint Dempsey's spot-kick was saved by Mark Bunn.

It was a game that Norwich barely looked like they wanted to win for long periods, but they find themselves in the last eight thanks to a remarkable late rally.

Chris Hughton's Canaries seemed pre-occupied with keeping Spurs at bay rather than mounting advances of their own for much of the game and Spurs, who maintained possession well, should have been out of sight before Bale gave them the lead midway through the second half.

The Wales international was behind almost all of Tottenham's good work in the opening period, creating a chance for Dempsey that the American put over, and causing havoc down the Norwich left.

The pattern continued after the break, with Bale providing the thrust for Spurs - although the Welshman should have done better than shoot at Bunn when released by Yago Falque.

Inevitably the opener came though the winger, this time cutting in from the right and finding the corner with his less favoured right foot.

Rather than that be the cue for Spurs to finish off the home side, though, it was a goal that awoke the Canaries and the Carrow Road crowd.

Hughton introduced Grant Holt, Jackson and Tettey - and all three would prove to be central to Norwich's fightback.

The equaliser came when Tettey's volley from Ryan Bennett's knock-down took a nick off Jan Vertonghen and eluded Hugo Lloris.

And, with just three minutes to go, Lloris was unable to hold on to Holt's header from Robert Snodgrass's free-kick and Jackson was on hand to bundle over the line.

Norwich's joy soon turned to despair as the referee pointed to the spot following Tierney's challenge on Walker, but Bunn was equal to the task to seal victory.

"The first goal takes a deflection - we haven't had one of them all season. Sometimes you need that little bit of fortune but you've got to be in the right place.

"It was a fairly cagey game until then. They started better in the second half but goals change games and we had to go for it.

"I thought the lad [Kyle Walker] made a meal of the penalty. Marc Tierney says he didn't touch him.

"Once you start hitting the quarter-finals you are not so far away from a final. So yes, it's a good feeling for the club. I'm pleased for the club because it's been a long time."

"It's a pity to see the game slip from our hands. We had a good performance with good chances. It's difficult to take - in the end we congratulate them.

"Norwich did well to get back into the game - credit to them. In the end, they took their opportunities in the final minutes.

"We go back to the league and focus on winning there.

"Keeper Hugo Lloris did extremely well. He had a good, solid performance."