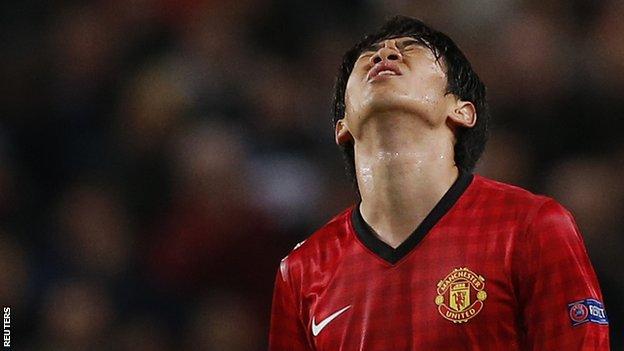 Manchester United's Shinji Kagawa has been ruled out for four more weeks.

The Japan midfielder, 23, injured his knee during the against Braga on 23 October.

2009: Becomes highest scorer in J-League Division 2 as Osaka are promoted to top flight.

2010: Scores seven goals in 11 J-League appearances and joins Borussia Dortmund for 350,000 Euros. Misses out on a World Cup spot.

2012: Wins league and cup double with the German side, scoring 13 goals. Moves to Manchester United.

But ahead of Tuesday's Group H match against Galatasaray, he said: "His progress has been quite slow. He hasn't started any outside work and he may be another four weeks away."

He added: "Overall, he will probably be looking at six to seven weeks since the injury. The first job now is to get him back."

Jones, 20, has yet to make an appearance this season after hurting his back during pre-season and then suffering a meniscus tear in his right knee.

"It's a big day for Phil Jones," said Ferguson. "He's been out all season but he's done enough training now to make sure his fitness is OK. I'm looking forward to bringing him back.

"Phil's had different types of injuries [in his United career so far]. But he's young so he's still to develop physically in terms of his body. He's only 20 years of age so there's plenty of time for him."