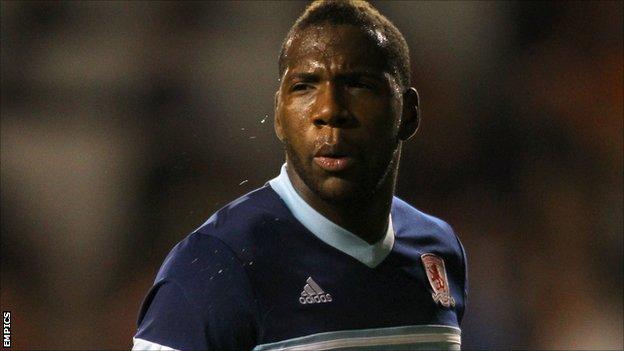 25, scored his first goal for the Teessiders following his return to fitness from a groin problem.

"He's only had spells really and he's getting there," Mowbray told BBC Tees.

"We saw flashes of what I know he can do, and the fitter he gets the more composed he will get."

Miller was reunited with Mowbray, who coached him at West Bromwich Albion, when he ended a disappointing first year at the City Ground with a season-long loan deal with Boro.

"It was four or five years ago when I had him at West Brom," Mowbray said.

"He slows people down and then bursts past them like they're standing still, and he can threaten the goal when he opens his left foot up.

"He can bend things in, he can smash them in, he can chip it over goalkeepers and he has a wonderfully soft left foot when he needs it, I'm sure the goals will flow."

Former England Under-21 international Miller has made seven appearances at Boro, scoring once.