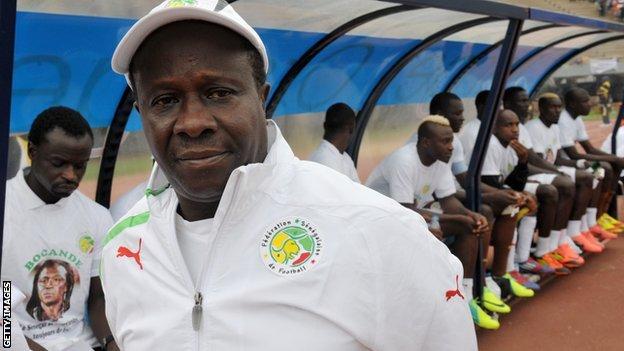 Senegal coach Joseph Koto has been sacked 10 days after the violence-tainted 2013 Africa Cup of Nations qualifier against Ivory Coast.

Koto and his assistant Karim Sega Diouf were dismissed after a Senegal Football Federation meeting on Tuesday, for failing to meet their objectives.

The Teranga Lions were formally disqualified from the 2013 Nations Cup last week by the Confederation of African Football.

The match against the visiting Elephants was abandoned 14 minutes from time because of crowd violence, with the Ivorians leading 2-0.

Two goals from Didier Drogba in Dakar had extended Ivory Coast's overall lead in the final-round qualifier to 6-2 on aggregate.

The match had to be called off as Ivory Coast players and fans were subjected to a hail of stones, bottles and chairs, with fires lit in the stands and firecrackers thrown.

Trouble flared at the 60,000-capacity stadium after a penalty converted by captain Drogba gave his side a seemingly unbeatable lead.

After a 40-minute delay while security officials battled to restore calm, the match was abandoned.

Koto had been in the job for only four months, having taken over from Amara Traore who lost his job following the Teranga Lions first-round exit from this year's Nations Cup in Equatorial Guinea and Gabon.