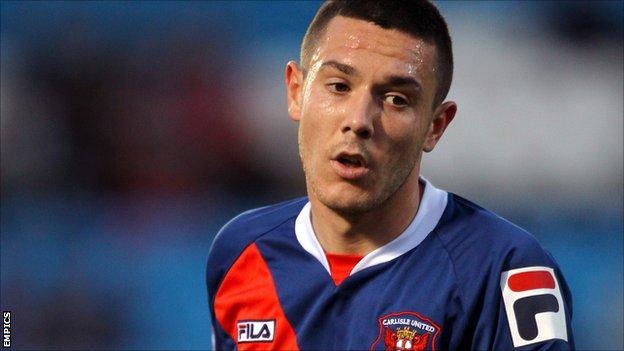 Noble, 21, created the first goal for striker Joe Garner with a perfect cross to steer the Cumbrians on the way to a second home win of the campaign.

"Liam worked his socks off, and he wants to play, he wants to be part of it," Abbott told BBC Radio Cumbria.

"I thought his all-round performance was fantastic."

Abbott added: "If you could ever have a type of character within your group that will make something happen for you, Liam is the man.

"I thought his work for the first goal was fantastic, he is a little bit lucky actually, he was trying to be too precise, he has got free at the far post and if he puts his foot through it he scores."

Garner ended the game with two goals in addition to Matty Robson's late strike, in contrast to a run of just one goal in the last three games.

"After the misses we had on Saturday I wouldn't be sitting here thinking Joe Garner might have lapped them up," Abbott joked.

"I thought in the first half we played alright but we were a bit edgy, it gets into your mindset without even knowing.

"We tear the roof off the dressing room when we think it is right. After Notts County we were really upset. We told them to respond to that, they owed everybody.

"We knew we were better than that and once you get the goal you can see the shackles come off and we start playing some really decent football/ I thought the goals were terrific in the end."