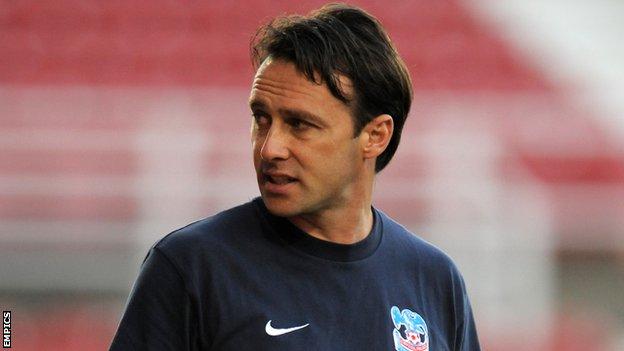 Crystal Palace co-chairman Steve Parish has said Dougie Freedman's replacement as manager will be getting a "fantastic opportunity" with the club.

Parish told BBC London 94.9: "Obviously it's a blow but we've got to look forward. It's a fantastic opportunity for somebody.

"It's just [about] us finding the right man. We'll need to sit down and think about what we want."

He added: "We're in a very different situation to when we appointed a manager before.

"We're in a good place in the league and have a fantastic squad.

"The thing we need to do now is try and work out how we keep things going and bring someone in and give them an opportunity to express themselves.

"We need to find the right man who can continue the success.

"We want to try and get someone installed as soon as possible."

Freedman took charge of the Selhurst Park club in January 2011 and steered them away from the Championship relegation zone that season.

As a player: Scored 110 goals in 371 appearances in two spells at Selhurst Park

In the 2011-12 campaign he led the Eagles to the semi-finals of the League Cup and 17th place in the table.

Parish says he was surprised by Freedman's decision to join Bolton as Palace are currently fourth in the table.

"I didn't see it coming at all," he continued.

"I thought we were in a good place and I felt we had really put something together that was exciting.

"He's done a fantastic job for 18 months for the club and as a player before that. We've all put a lot of hard work in.

"We put a good case forward but in the end Dougie felt it wasn't enough and his future lay elsewhere.

"Unfortunately it's football. If you have success, everybody wants you.

"I guess Dougie feels that's a better place to be and they have more chance of fulfilling his ambitions. That's his prerogative."

Palace started life without Freedman with a 1-1 draw at Barnsley on Tuesday night, with assistant manager Lennie Lawrence and first-team coach Curtis Fleming taking charge of the squad.

Eagles skipper Mile Jedinak is hopeful the club will be able to continue their strong start to the season despite Freedman's departure.

"It hasn't really sunk in too much," said the midfielder.

"We found out just before the game as a group. It is what it is. It's obviously a huge loss but we've got to continue on.

"After all the success with him, we need to back ourselves and we'll be OK.

"The club is in a position where we are comfortable and a lot of the credit has to go to him for turning it around from where it was.

"Things like this can happen in football but I'd like to think, as a captain, we can continue on our way."