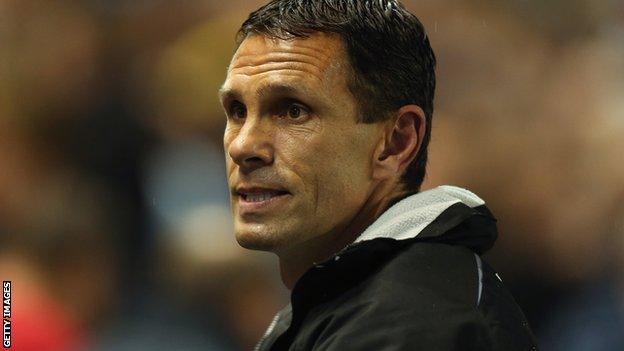 Brighton & Hove Albion manager Gus Poyet says he is "bored" of talking about their problems in front of goal.

The Seagulls have only scored once in their last five games - a run which has seen them pick up just two points.

He told BBC Sussex: "It's difficult to analyse. I'm getting bored and fed up of repeating the same words. I feel sorry for the fans.

"We could talk forever. How are we going to score? Who knows? It doesn't look like we have enough quality."

The Seagulls, who were top of the Championship at the end of September, have fallen to ninth after they missed a penalty during their 1-0 defeat to league leaders Leicester City on Tuesday evening.

The Uruguayan says signing another striker on loan, one possible solution to his problems up front, is complicated by the need for the player to fit into Brighton's passing game.

"I don't know," he said. "Every time we get a player we need to explain too many things.

"We don't just run about and play 50-50 football. We have an idea and rules we have to respect.

"I could bring another player. I could do what other managers do and bring two [strikers] and put two in the stands and play another two.

How are we going to score? Who knows? It doesn't look like we have enough quality

Albion winger Will Buckley says the players are equally frustrated with their current shortcomings up front.

"We need to do something and change something fast," Buckley told BBC Sussex.

"We're playing well and most of the games we've lost we have been the better side but that is no consolation.

"We've got to concentrate on ourselves and keep going.

"We just need that bit of luck and fortune in our favour and hopefully we can get that win soon and get back in the play-off area."