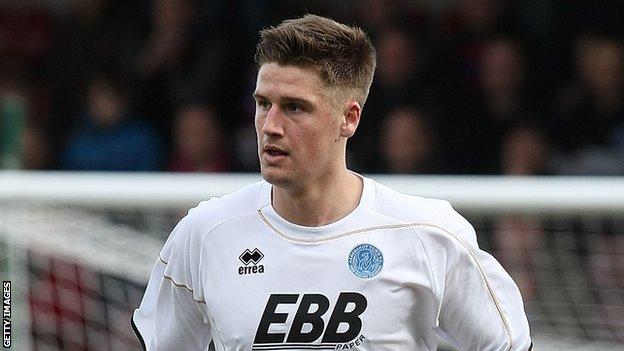 Aldershot Town defender Sonny Bradley says it is a relief to end their run of seven straight defeats.

The Shots won 2-1 away to Southend on Tuesday to register their first victory in League Two since 18 September.

The 20-year-old told BBC Surrey: "We've been on the back foot for nearly eight games and it was such a relief.

I blame myself for their goal and partly for giving away the penalty. When I got the goal, I paid it back to the club

"We've lost so many on the trot and to get the win means a lot. Hopefully we can go on a run and start climbing the table to where we think we should be."

Shots keeper Jamie Young saved a penalty with the game level at 1-1 before Bradley scored the winner with the first goal of his senior career.

"We feel like we haven't had much luck in the last four or five games and we got some against Southend," he continued.

"I blame myself for their goal and partly for giving away the penalty. A lot of credit goes to Jamie for a great save.

"When I got the goal, I paid it back to the club."

Meanwhile Bradley, who is on a season-long loan deal from Hull, has paid tribute to manager Dean Holdsworth for backing the side through their recent bad run.

"He never stops believing in us," the centre-back said.

"Before the game he was so positive and he transfers that energy into us.

"We knew we could win and we believe in him as well. Not one of the players will ever turn their back on the manager."