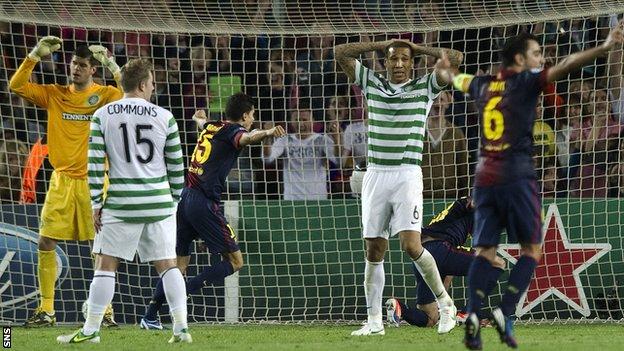 He would have been within his rights to be a little less understated, for there can be little doubt that on Tuesday night, Celtic's reputation - and the manager's - grew considerably.

Detractors and churlish gloaters have been quick to point to the match statistics, which underline Barcelona's dominance over the 94 minutes.

Thirteen shots on target to Celtic's two, another 13 off target, again compared with two from Celtic, and the frightening possession stats - 74% to the kings of keep-ball.

Those facts are undeniable, but do not tell the full story by any means.

For right up until that last-gasp Jordi Alba tap-in, Celtic were on course to become only the second team this season - Real Madrid being the other - to take any points from Barcelona.

Celtic's organisation and tactical discipline was tremendous, particularly in the first half when they limited Barca to just three clear-cut opportunities, sticking so close to their opponents that when they finally did score on the stroke of half-time, it was as the result of the most intricate and sublime passing and movement.

Lennon's side were tenacious and intelligent in their pressing of the ball and the manner in which they denied Barcelona the space to play their tiki-taka brand of football.

Huge credit for that has to go to Lennon, whose managerial credentials continue to grow.

Notably, he resisted the temptation to pack his midfield from the off, instead playing Gary Hooper just behind the increasingly talismanic Georgios Samaras.

In the early stages at least, that gave Celtic a real attacking threat and meant it was less simple for Barca to build from the back.

The loss of Samaras to injury in the first half may not have changed the final result, but it certainly made life easier for the Barcelona rearguard.

Of course, as the game wore on and the visiting players began to tire from the physical and mental exertions, Barca did find it easier to navigate through them, but even then they found a goalkeeper in inspired form.

In a display reminiscent of David Marshall's when Celtic fought out a goal-less draw at the same venue nine years ago, Fraser Forster produced save after save - at least two of which were absolutely world-class.

Forster was not alone in leaving the pitch with his head held high.

Efe Ambrose and Kelvin Wilson were rock-like at the heart of the defence, Scott Brown, until his departure early in the second half, was a constant pest to the normally unflappable midfield maestros in the Barcelona team, and Victor Wanyama belied his youth with another mature, cool-headed performance.

For all that, of course, Celtic emerged from the match pointless and still have much to do to reach the knock-out stage.

It would be foolish to believe that the return match in two weeks' time will be any easier for Celtic.

So, the crucial tests will come away to Benfica and at home to Spartak Moscow.

If nothing can be taken from the home game with Barcelona, a point in Lisbon might be necessary to ensure they go into the final game against Spartak knowing a victory would see them through.

Regardless, though, Lennon's side are growing in stature and belief, after a tentative start against Benfica.

If they continue in that vein, their reputation will more than remain intact.