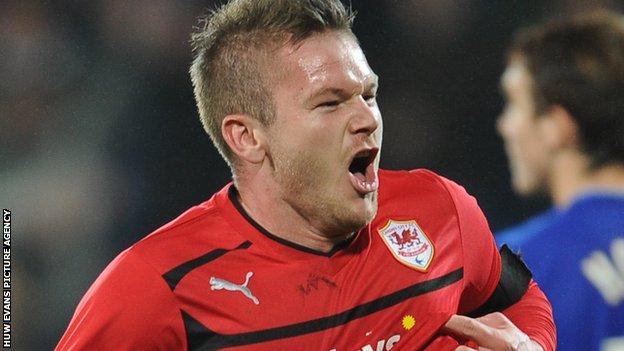 Aron Gunnarsson says his winning goal against Watford was the perfect response to being omitted from Cardiff's starting line-up.

Gunnarsson, 23, had been left out after a 3-1 defeat at Nottingham Forest.

But he came off the bench to seal a 2-1 home win over Watford which keeps Cardiff second in the Championship.

"When you start on the bench you want to come on and make the difference. Hopefully I did with my goal," said the Iceland international midfielder.

Teams come here and they want to do us on the counter attack. We need to get used to that

Gunnarsson replaced Tommy Smith with six minutes remaining and scored the winner with a header from Craig Noone's cross in injury time.

"It's football and sometimes you get dropped," Gunnarsson added.

"We've got a big squad now and got great players. Obviously it's hard to get into the team and [there's] more competition for places.

"It's a positive thing not a negative thing."

Cardiff had been trailing to a first-half goal from Tommie Hoban, but the home side hit back after the break.

The visitors, down to 10 men following Daniel Pudil's dismissal, were pegged back when Peter Whittingham equalised from the penalty spot.

Gianfranco Zola's side had a second man sent off after Nathaniel Chalobah was shown a second yellow card before Gunnarsson's late headed goal secured victory.

The win saw Malky Mackay's side set a new club record of six successive home league wins at the start of a season.

"That's brilliant," Gunnarsson said of the achievement, which beat a record which had stood for 66 years.

"Hopefully we'll keep that going and we're glad to keep the home record going like that.

"Teams come here and they want to do us on the counter attack. We need to get used to that.

"It was hard to break them down. We've done well to get the three points."

Cardiff will put their 100% home record on the line again on Saturday when they host Burnley in the Championship.