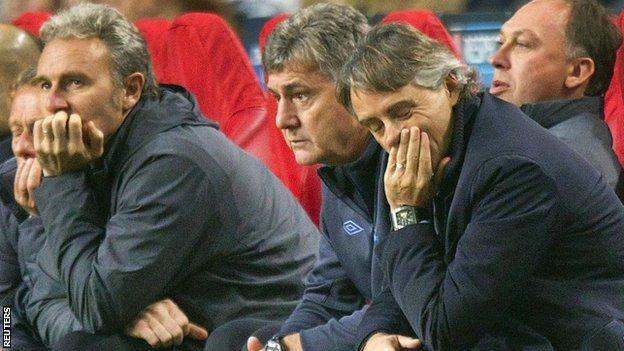 leaves them rooted to the bottom of Champions League Group D and in danger of failing to finish third and qualify for the Europa League.

After lifting the league title for the first time in 44 years at the end of last season, manager Roberto Mancini looks far from finding the formula for continental success.

and the Italian blamed himself for City's latest disappointing result.

So where does he need to change? BBC Sport pundit Robbie Savage, speaking on BBC Radio 5 live, offers his former Leicester City team-mate some advice.

Reorganise at the back

"Micah Richards came out after the game and questioned the switch to five at the back, but I don't think that he can have a go at the manager for the defending.

"I was one of the weakest headers of the ball ever but if I was up against a defender who was three or four inches taller than me, but stationary, then I would have backed me.

"Zonal marking can work if everyone attacks the ball perfectly, but is the easiest system to get wrong because it all it takes is one person's concentration to slip."

"It was individual errors. Vincent Kompany didn't anticipate the cut back and James Milner lost the goalscorer for the first goal, while for the second Joleon Lescott lost out for the header and on the third Gareth Barry was beaten in midfield.

"That has been in keeping with their previous two matches in the group, when their defending has been terrible.

"However, in terms of organisation, I don't know why they persist with zonal marking.

"It is what cost them them in Amsterdam when Niklas Moisander got in front of Lescott and headed in the second goal.

"They are a big and strong side, but the system they are playing allowed one of Ajax's smaller players to get the run on them. That goal changed the game and killed City."

Acclimatise to the top level

"City are in a terrific group in terms of quality, but that happens in the Champions League and it is not going to get any easier when you bear in mind the damage that some of these results will do to the coefficient that decides the seeding of English teams in the competition.

Defensive woes on the road

Man City have now conceded in a club record five consecutive away matches in Europe.

"There is no real logic to it when you consider what they can do in the Premier League, but sometimes I think they look a little naive away from home in Europe.

"They put four forwards on the pitch at the end and had no shape. You can maybe get away with that at home, but you often get punished at this level.

"Roberto Mancini cannot keep saying that it is his fault. Sooner or later he has to make sure that it is not his fault and he puts a team out to win the game."

"Ajax were lovely to watch. Their passing and movement was excellent, they had pace and width to stretch City and if they had a decent centre forward they would have a very good chance in this competition. They are a real team.

"But as pretty as Ajax are, City could have had four or five goals. They simply did not take their chances.

"They will now have to concentrate on their domestic campaign and work out how they can do better next time."