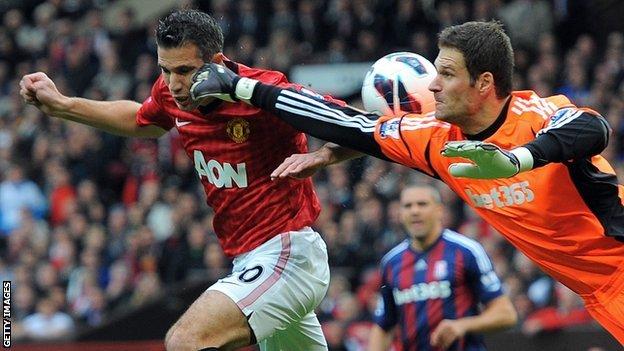 The Bosnia international is well-placed to judge the contenders' relative merits, having already faced all three in a tough start to Stoke's campaign.

After holding City, and losing narrowly to Chelsea, Begovic's side were beaten 4-2 at Old Trafford last weekend.

"United have impressed me the most this season," he told BBC Sport.

"Going forward, they have so much talent and flair. The whole front four of that team, including Danny Welbeck and Antonio Valencia, are so dangerous."

For Chelsea, Juan Mata and summer-signing Eden Hazard - conjuring up five goals and 10 assists in seven league starts together - have particularly impressed Begovic.

His international team-mate Edin Dzeko - who scored both of City's goals in their 2-1 victory over West Brom last weekend after coming off the bench - was singled out as City's major threat.

Robin van Persie has scored five goals at Stamford Bridge in the Premier League, which equals the best of any visiting player in the competition.

Wayne Rooney has scored five goals in his last six appearances in all competitions against Chelsea.

He added: "City have so much talent in their squad so it is a tough team to break into but Edin's performances speak for themselves. If he continues to do that on a regular basis, he should be starting in the first-team. I believe he is one of the top five strikers in the world."

The Blues are unbeaten in the Premier League, with United four points back after losing to Everton and Tottenham.

Sir Alex Ferguson's men face a tough task, having won only one of their last 12 trips to Stamford Bridge in all competitions.

But United strikers Wayne Rooney and Robin van Persie have contributed three goals and five assists in only two league starts together, and Begovic feels the pair are now forming a potent partnership.

Having been beaten twice by Rooney and once by the Netherlands forward last weekend, Begovic said: "Playing against them anytime is difficult but now it looks like they are getting their mojo together and gelling. Any mistake we made was punished by them."

But while the Red Devils are a potent attacking force, their problems lie at the other end of the pitch.

In their eight league games, United have shipped 11 goals - five more than Chelsea and two more than City.

Ferguson has opted to rotate goalkeepers David de Gea and Anders Lindegaard, but former Atletico Madrid man De Gea is likely to keep his place in the starting line-up as a result of the Dane injuring his hand in training.

Begovic - who came close to joining Chelsea in 2010 - has now established himself as Stoke's number one, but recognises the frustration suffered by United's two shot-stoppers.

"It is funny for a goalkeeper when you are in a rotation process. It is difficult but when you are playing you feel settled. It makes you play better," said the 25-year-old.

"Last year when De Gea was number one, he played his best football. It is important to know as a goalkeeper that you're number one as it enables you to perform well and you have the confidence to do that."